There is a mixed bag of outlooks concerning the current bull market and its staying power. In an article posted yesterday on CNBC.com, Validea CEO John Reese describes one metric used by Warren Buffett to gauge conditions on the ground and signal where things might be headed.

The Buffett mantra of focusing on business fundamentals rather than hearsay transcends to today’s prickly political landscape. Reese writes that the Berkshire Hathaway CEO believes the “performance of companies over time is what drives those stock returns, not necessarily who wins the race for the presidency.” That said, he does believe in paying attention to the market’s overall valuation.

The metric Buffett uses consists of the ratio of market capitalization to gross nation product (GNP) which, he has said, “is probably the best single measure of where valuations stand at any given moment.” If this ratio is extremely high (that is, the market is valued way above the total goods and services of an economy), Buffett believes that “it’s time to be wary of stocks,” writes Reese.

Note: The U.S Bureau of Economic Analysis now uses GDP as the primary economic measure, but GDP and GNP are not materially different.

Reese explains that if you subscribe to Buffett’s mantra, the current ratio of market cap/GDP of nearly 125 percent “could be problematic.” That said, the article outlines what Buffett refers to as “certain limitations” of the ratio and argues that Buffett remains generally optimistic about the U.S. stock market. Berkshire Hathaway’s hefty cash balances ($85 billion as of September 30th, the highest level in Berkshire’s history) could indicate that the Oracle of Omaha isn’t finding enticing investment prospects.

Reese suggests that strategic investors “would be wise to keep an eye on both the market cap/GDP ratio—or GNP if they prefer–as well as Buffett’s cash balances, and use these indicators as part of their ongoing long-term portfolio-management process.” 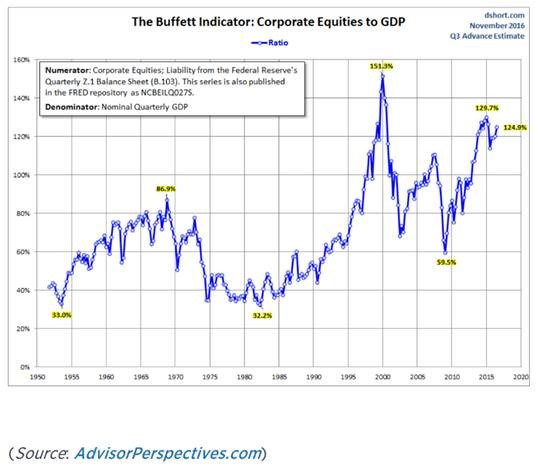 Note: The U.S Bureau of Economic Analysis now uses GDP as the primary economic measure, but GDP and GNP are not materially different.