Based on its analysis of bull markets since 1976, Bank of America Merrill Lynch says that geopolitical factors, central bank policies and a focus on company earnings are all “distractions” when it comes to “riding bull markets in emerging stocks.” This according to a recent article in Bloomberg. 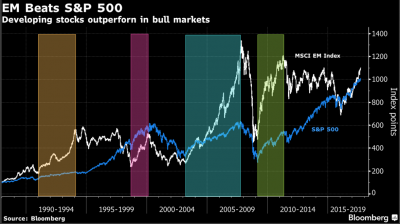 Analysts at the firm have asserted that emerging shares could double in two years and that an overweight is warranted, the article says, even though some investors are getting increasingly skittish regarding escalating tensions on the Korean peninsula that they believe could trigger a selloff. BofAML asserts, the article says, that “the current bull market is likely to end the same way the last six have, crushed by recession or exhausted by overvaluations.”

In a recent note, the article reports, BofAML suggests that investors should “sell when price-to-book valuations, currently at 1.77 for the MSCI EM Index, reach three times, or when they see a U.S. global or Asian recession coming,” adding, “If history is any guide, emerging-market stocks rise 230 percent on average in bull markets that last around 42 months.”