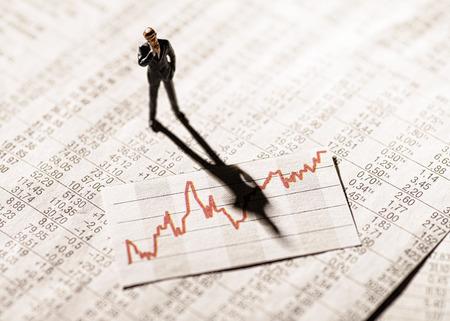 Whenever the market declines, the news is filled with information that can lead investors to panic. That is no surprise since doom and gloom sells. Even with the small pullback we have recently had (we can’t even call it a correction since the market hasn’t declined 10%), there has been no shortage of negative headlines and calls for impending doom.

I have previously written about the dangers of letting these headlines play any role in your investment strategy, so I won’t cover that here, but another tool that I am seeing used more and more is the binary market sell indicator.

The binary indicator is very alluring for investors because it offers up exactly what they want. It provides the hope that there is a way to know exactly when to sell to avoid corrections or bear markets and when to get back in after. It is essentially the holy grail of investing.

The problem, of course, is it doesn’t exist.

There are many of these types of indicators you will see in the media during market declines. Some will use valuations. Some will use technical analysis. Some will use investor sentiment. Others will use more indirect things like the slope of the yield curve.

But none of them will offer the one thing many who discuss them seem to promise – the ability to predict the next major market decline in advance.

Below are some of the indicators I have recently seen used as predictors of a coming market decline. In each case, what the indicator actually means can vary substantially from what those who use it would make you believe.

The market is clearly expensive. The median CAPE of all stocks in our database is around 34, right now. That puts in in the 78th percentile historically. 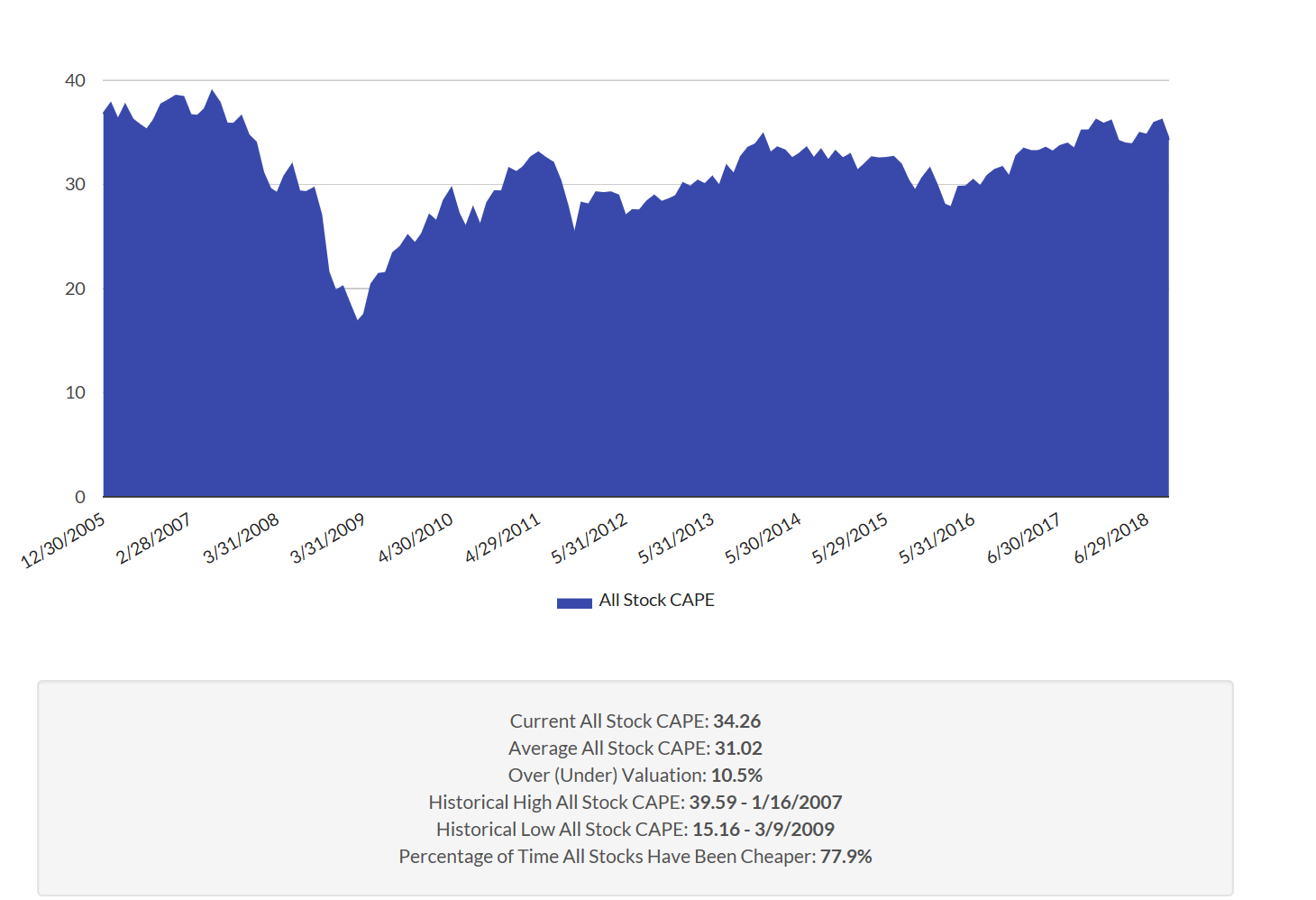 The median Price/Sales shows more substantial overvaluation. It puts the market in the 90th percentile historically. 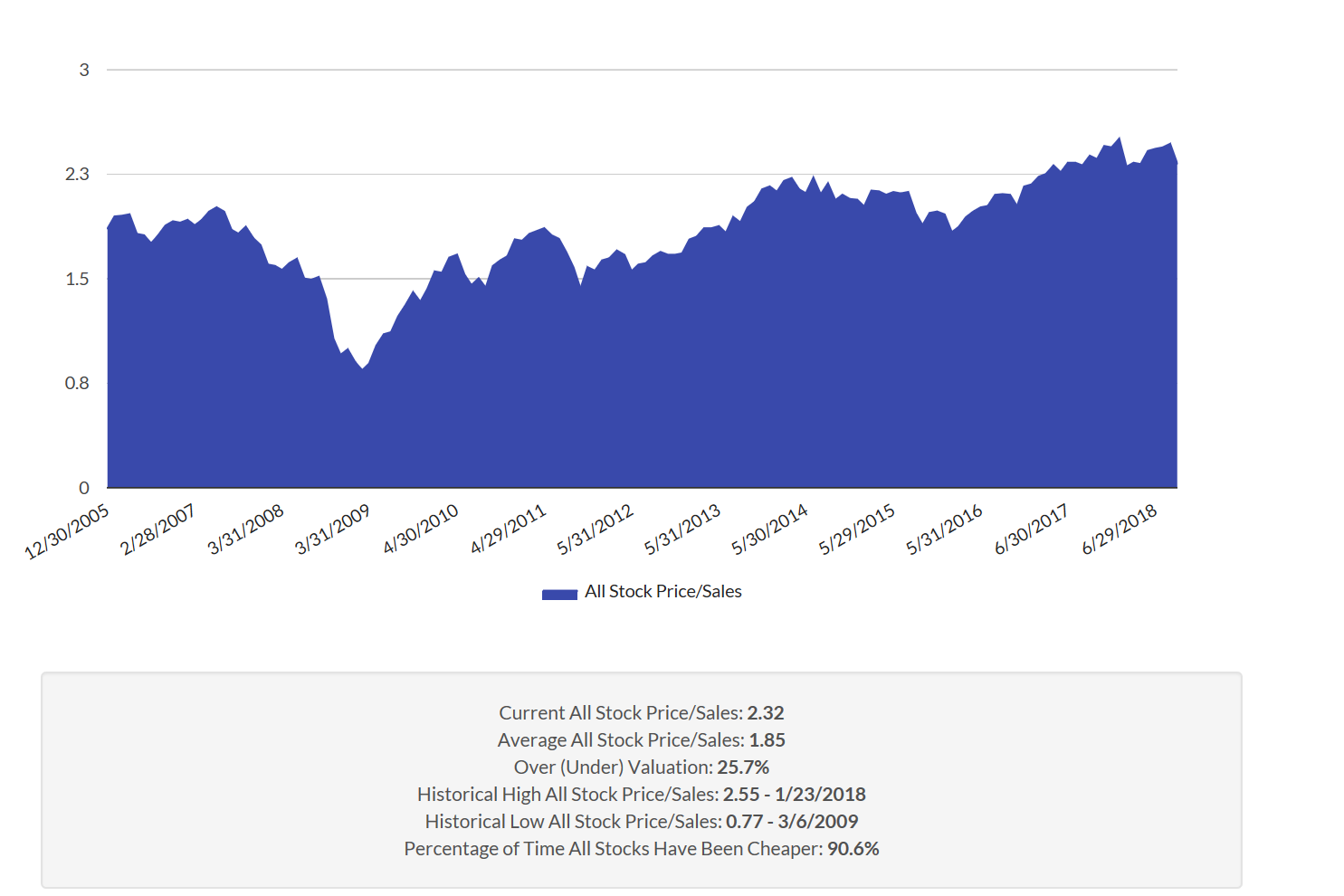 What both of these have in common, though, is that they tell you nothing about where the market is going in the next year, and very little about where it is going in the next 3-5 years. Valuations can be very good predictors of returns over the next decade, but they are useless for predicting short-term returns. To illustrate that, just think about the bull market of the late 90s and the one we are currently in. In both cases, valuations got very high, and stayed there for a long time. Investors trying to use those valuations to time the market missed substantial gains.

We Just Broke Below the 200 Day Moving Average

Trend following can be a very successful investment strategy for many investors. It produces similar returns to buy and hold over the long-term, but does so with smaller drawdowns and less volatility. The strategy essentially calls for selling stocks when they fall below a specific moving average and buying them back when it moves back above it. Trends can be very powerful in the market, and this strategy allows investors to stay on the correct side of the trend most of the time.

The most popular moving average used in trend following is the 200 day. As a result, the investing media watches it closely and will widely report when we fall below it. As you can see from the chart below, this occurred for the first time since 2016 in the recent market decline.

To put this in context, though, it is important to understand what this signal means, and what it does not.

The goal of a long-term trend following strategy is to try to avoid major market declines. The price you pay for doing that is a bunch of false signals along the way. In fact, when the S&P 500 breaks below its 200-day moving average, it produces gains more often than it produces losses. The strategy makes up for that fact through huge loss savings in bear markets. So a series of small incorrect signals are offset by a few very large correct ones.

For example, most trend following systems got the 2008 decline right and made it through that bear market with minimal or no losses. Since then, however, essentially every break below the 200-day moving average has been a buying opportunity.

A trend following strategy using an indicator like the 200-day moving average should be looked at as a long-term strategy. Using the indicator outside of the total strategy to try to predict individual market declines is not supported by the data.

Sentiment Has Gotten Too Positive

Sentiment is very similar to valuations. It is true that when it gets too positive, it is a bad long-term sign for the market, but it offers no value in predicting what will happen in the short-term.

Nick Maggiulli of Ritholtz Wealth Management wrote an excellent post on this topic. He looked at investors’ average allocation to equities over time and developed a strategy that moved into bonds when sentiment was too positive (investors had more than 70% of their portfolios in equities) and invested in stocks when sentiment was too negative (investors had less than 50% of their portfolios in equities). He found that strategy outperformed buy and hold by a wide margin. He also found that the portfolio would have been essentially impossible to follow for most investors.

Looking at the results of the strategy during the dotcom bubble, he observed the following

As you can see, the model moved to bonds in September 1996 and didn’t get back into stocks until October 2002!  Though it outperformed in the end, at what psychological cost?  Can you imagine how hard it would be to sit in bonds for 4 years while your friends (some of them dumber than you) got rich along the way?  It would be near impossible.  The same thing happened in the GFC when this model signaled to get out of stocks in May 2006 and get back in during November 2008.  Yes, this also outperformed “Buy and Hold” over that period, but who could’ve waited it out? 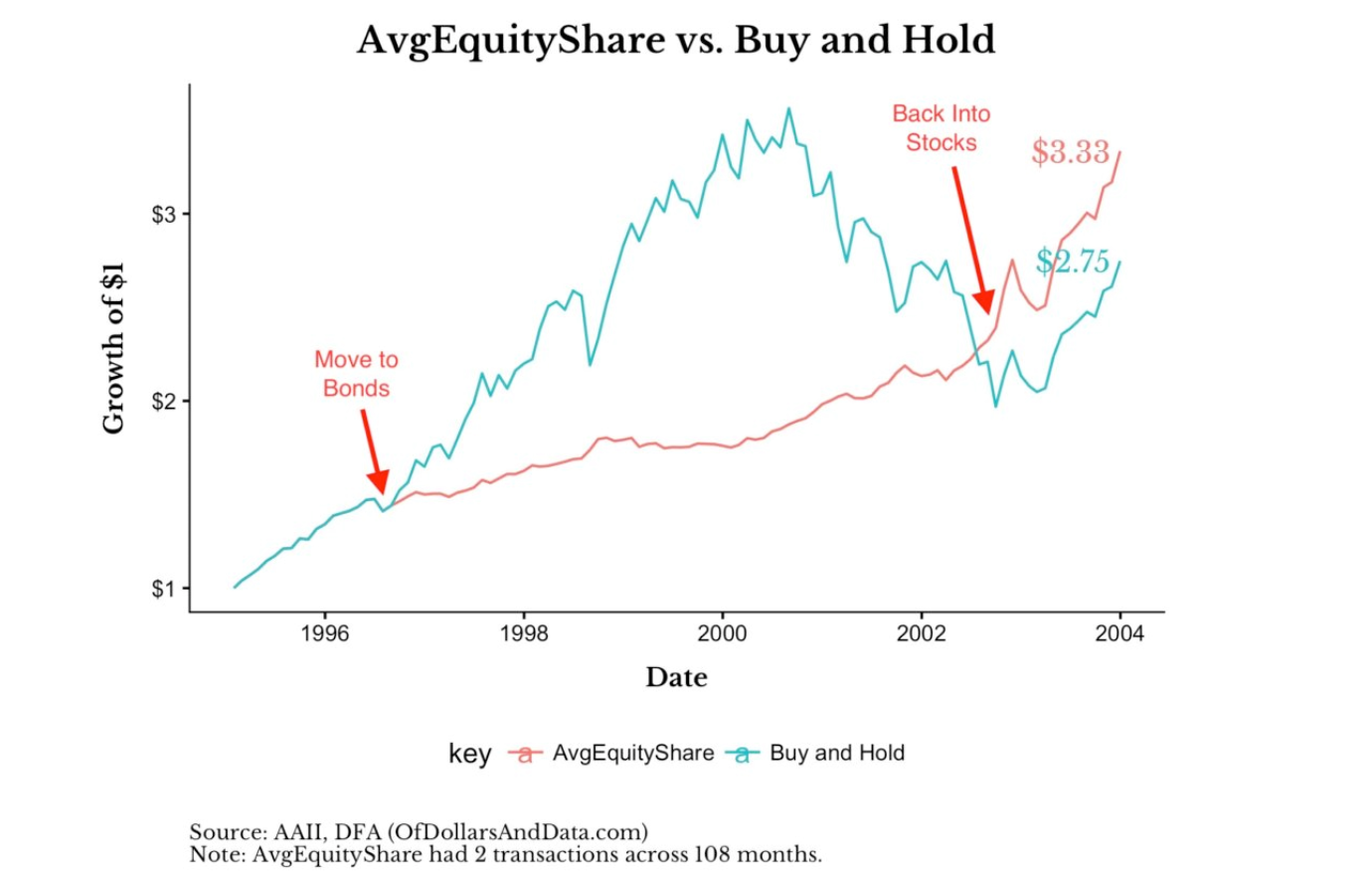 As Nick notes in the article, this indicator just recently turned negative. But like the late 90s, it could be negative for a really long time before we actually get a significant decline. The signal is therefore not very useful for predicting the next market decline.

The Yield Curve is Close to Inverting

The yield curve is probably the best predictor of recessions we have. That isn’t to say it is good because it doesn’t give you much information on timing, but when the yield curve inverts, we do typically get a recession in the next couple of years.

The yield curve being flat (or close to inverting) like it is now is not a signal at all. It is not useful in predicting a potential recession. In fact, a BMO study found that the stock market tends to do better than average when the yield curve is flattening. 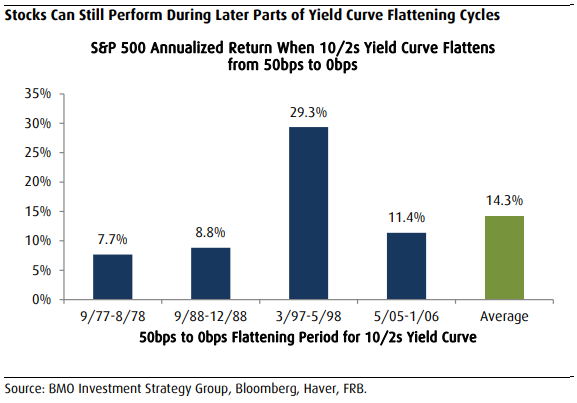 And even if the yield curve does invert, it doesn’t give you much information about if and when the market will decline. Although a decline in the stock market does tend to eventually follow a yield curve inversion, the BMO study found that stocks typically maintain or extend their gains in the year following it.

The Challenges of Short-Term Market Timing

The stock market is going to have a significant decline at some point. We could be at the start of it now or it could still be years in the future. It is tempting to try to time when that decline will come, and simple indicators are often used to do it. Investing is far from simple, though, and short-term market timing is not a winning strategy. Some of the biggest mistakes investors make occur in trying to predict when the market will fall. Accepting that isn’t possible may be one of the best things you can do for your portfolio.