In a CNBC interview that aired last month, Warren Buffett shared his thoughts on current market valuations and how he would respond to investors that feel they missed their opportunity to buy into the market. “Well, I would say they don’t know, and I don’t know. And if there’s a game it’s very good to be in for the rest of your life, the idea to stay out of it because you think you know when to enter it– is a terrible mistake.”

Buffett believes the U.S. stock market is a good game to be in. In fact, the dominant theme of his 2016 letter to Berkshire shareholders (which was released immediately prior to the interview) is the unwavering belief that America continues to be the best bet around. “This country,” he declares, “always comes back and wins. We have not lost the secret sauce.”

The investing legend’s eternal optimism extends to what many regard as a swollen market teetering on the edge of correction. This contrasts with Nobel Laureate Robert Shiller’s argument, shared in a recent Bloomberg interview, that the CAPE ratio, then at 29, is a “bad sign.” Shiller says, “This could be like 1997, when the CAPE was at 29 and held on for 10 years, but it doesn’t look good.” In 1997, he explains, “the country didn’t have the hope it has now.” The president, he says, “dominates our attention.”

Earlier this month, Ritholtz Wealth Management’s Ben Carlson wrote that the CAPE reached 30, an event that occurred two other times since 1871 and, in each case, was followed by stock market “‘doom.” Carlson points out, however, that a sample size of two events is “far too few to draw conclusions about what is going to happen this time around.” Every cycle, he says, is different in its optics; interest rates, inflation and general economic and political conditions are unique and can lead to widely different market reactions and outcomes. “Valuations alone,” the article asserts, “can’t force the market to crash and mean reversion doesn’t run on a schedule, but investors need to be aware of the potential risks in the market from current levels.”

According to Buffett, “We’re not in bubble territory or anything of the sort.” For him, the crux of investing remains in the companies themselves, not in the value the market places on them. His belief that stocks represent a good value notwithstanding current valuation levels is built on the comparison of earnings yield against the 10-year Treasury bond. “Measured against interest rates,” Buffett argues, “stocks actually are on the cheap side compared to historic valuations… I would say this, if the ten-year stays at 2.3% and would stay there for ten years, you would regret very much not having bought stocks now.”

Since owning a share of stock equates to owning a small part of a company, Buffett focuses on earnings yield to evaluate the return he will receive on an investment (the assumption being that a company’s management won’t distribute all earnings through dividends).

Earnings yield is calculated as follows:

The lower the stock price is in relation to its earnings, the higher the earnings yield–which is actually the inverse of the P/E ratio–and the calculation can be applied to individual stocks and the market as a whole. When the yield of the market index is higher than that of the 10-year Treasury bond, stocks can be considered as undervalued in comparison to bonds, a prime investing scenario for Buffett. The current median P/E of all stocks tracked by Validea is 23.4, implying a 4.3% earnings yield. The chart below shows the 10-year Treasury bond vs. the market’s earnings yield (using the median P/E in the Validea database). As you can see, the earnings yield has been coming down as valuations have been going up. In March of 2009, based on our own internal figures, the market has an implied earnings yield of 8.8%, using the median P/E, while the 10 year was trading at 2.8%. For a small period of time, the earnings yield on the market was 3x that of the ten year yield, which signaled an excellent buying opportunity.

So what’s the takeaway — while stocks may not look cheap based on most traditional measures—their value relative to the alternatives suggest that they still hold promise for investors.

As Buffett so astutely points out during the interview, “The ten-year bond is selling at 40 times earnings. And it’s not going to grow. And if you can buy some business that earns high returns on equity and has even got mild growth prospects, you know, at much lower multiple earnings, you are going to do better than buying ten-year bonds at 2.3% or 30-year bonds at three, or something of the sort. But that’s been true for quite a while.” 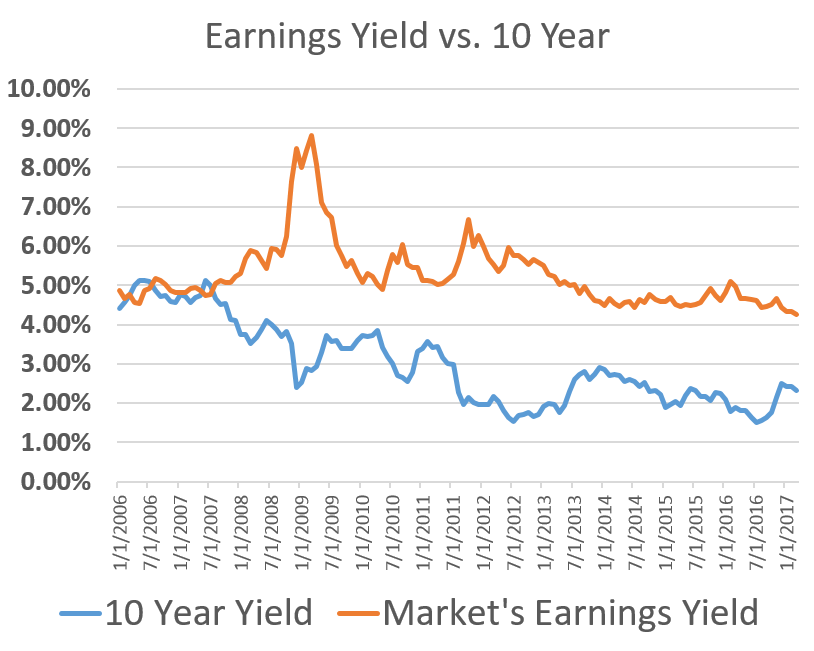