Warren Buffett is the winner in the bet he made with finance professionals back in 2007 that, over the ten years between January 1, 2008 and December 31, 2017, the S&P 500 would outperform a portfolio of funds of hedge funds (when performance is measured on a basis net of fees, costs, and all expenses). This according to an article in this week’s AEI. 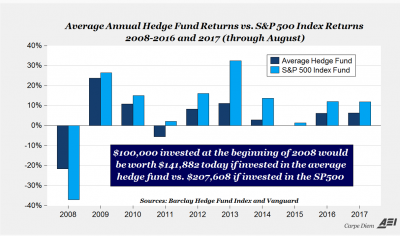 Ted Seides, co-manager of Protégé Partners, was the only fund manager to accept Buffett’s challenge. The following results are outlined in Berkshire’s 2016 letter to shareholders:

“Buffett’s index investment bet is so far ahead,” the article states, “that Seides conceded the match, although it doesn’t officially end until December 31st.” Buffett will donate the winnings to the charitable organization Girls Inc. of Omaha.