According to an article in Bloomberg, “the number of S&P 500 companies saying profits will trail analyst estimates outnumbered those saying they’ll beat them by a ratio of 8-to-1 in the third quarter,” the highest level shown by Bloomberg data going back to 2010.

The article cites possible reasons, including: 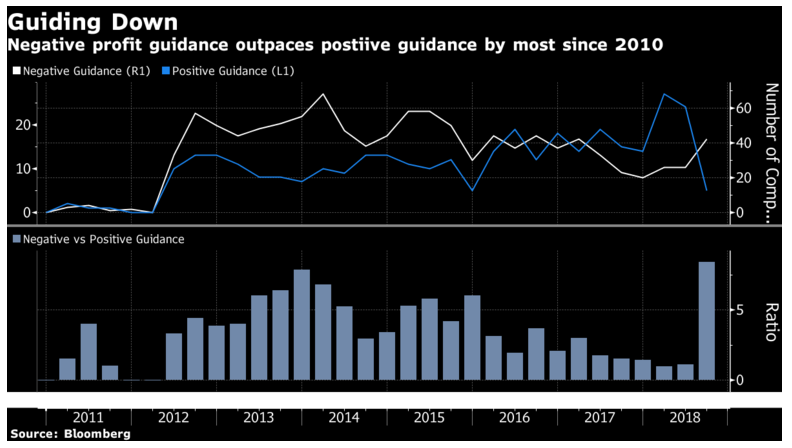 But the article notes that, “for skeptics looking for evidence income growth is peaking, a more ominous take-away is forming.” It cites comments by Citigroup’s chief U.S. equity strategist Tobias Levkovich, who recently wrote, “Given ebullient investor sentiment, we do not think there is much room for companies to disappoint without taking a hefty toll on share prices.” He adds, “Notably stronger dollar and higher interest rates plus some softness in emerging economies all intimate the potential for misses.”

The article also cites findings by UBS Group AG that management sentiment fell in the second quarter. According to Keith Parker, the firm’s head of U.S. equity strategy, “negative language is likely to pick up during this reporting season given the uncertainty around trade talks between the U.S. and China.”