While gold has been the popular inflation hedge over the past ten years, copper was a better bet according to a recent Bloomberg article. “While data show that broad community indexes provided the best bang for the buck during periods of rising costs in the U.S., the red metal stands out. 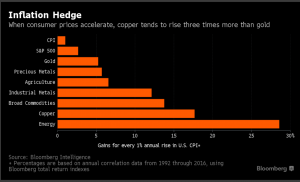 According to the article, for every 1% annual increase in the consumer price index since 1992, copper rose by nearly 18% compared to 5.2% for gold (according to data compiled by Bloomberg). Copper, says Jodie Gunzberg of S&P Dow Jones Indices in a recent interview, is “more sensitive to inflation and the dollar because of its uses and its growth with the economy.” When construction and manufacturing are growing, for example, so do sales of wire and pipe.

While inflation has been modest since the financial crisis, the article says, there are “signs it may start to accelerate again,” noting Fed chairman Janet Yellen’s pledge to implement more interest rate hikes this year. That said, Bloomberg points out that “not everyone is convinced inflation is going to take off, especially with low prices for energy, perhaps the biggest commodity influence on consumer costs.”