Rob Arnott and Christopher Brightman of Research Affiliates recently discussed the allocation and performance of PIMCO All Asset Fund, which goes outside mainstream investments into what they describe as the Third Pillar. Arnott explains that a three-year bear market in Third Pillar investments has impacted investors’ outcomes and outlooks. Although the fund’s 7% loss from 2013 to 2015 is significantly better than the relevant benchmarks, it appears disappointing in light of the excellent performance of the First Pillar investments (i.e., mainstream stocks). “Even though most investors have far less invested in the Third Pillar than they invest in U.S. stocks, a grinding three-year bear market in an unfamiliar set of asset classes is painful and is clearly testing our investors’ patience,” Arnott says. Nonetheless, he argues that First and Second Pillar investments can’t provide true diversification. Third Pillar investments offer diversification& Rock  into out-of-mainstream markets, attractive relative valuations, and protection from rising inflation expectations.  Arnott notes that while bonds have lagged sharply for the past three years, not many investors have bailed out of bond investing because bonds are familiar diversifiers.  “The early weeks of this year are reminding us why we wanted diversification in the first place and are showcasing our very low correlation with mainstream stocks and bonds; we’ve been up on some of the very worst days for U.S. stocks.” says Arnott.  Due to investors’ concerns being more about deflation than inflation, and therefore high odds of rising inflation expectations, there are some superb bargains in the Third Pillar.  Arnott stresses that investors have a bad habit of chasing past performance rather than future performance although the market doesn’t reward that.  He observes: “Bargains cannot exist in an absence of fear.”

Brightman goes on to write they are increasingly confident about All Asset’s portfolio positioning in Emerging Market asset classes after a challenging 2015. He notes that this is largely due to the understandable but pervasive fear of emerging markets that has created current bargain prices. “Valuations, which are both compelling relative to their individual histories and relative to other market opportunities, makes emerging markets even more attractive today,” he explains. And across all common valuation markets, emerging market equities are cheap. Using Shiller P/E, All Asset found that when emerging market equities were priced in the lowest 4th percentile, five years later they returned a staggering average cumulative return of 188%.  They also found that these results show up in other markets.  When Shiller P/E multiples are depressed, reversion to normal valuation has followed. Brightman goes on to reiterate one of All Asset’s core tenets, “the largest and most persistent active investment opportunity is long-horizon mean reversion.” 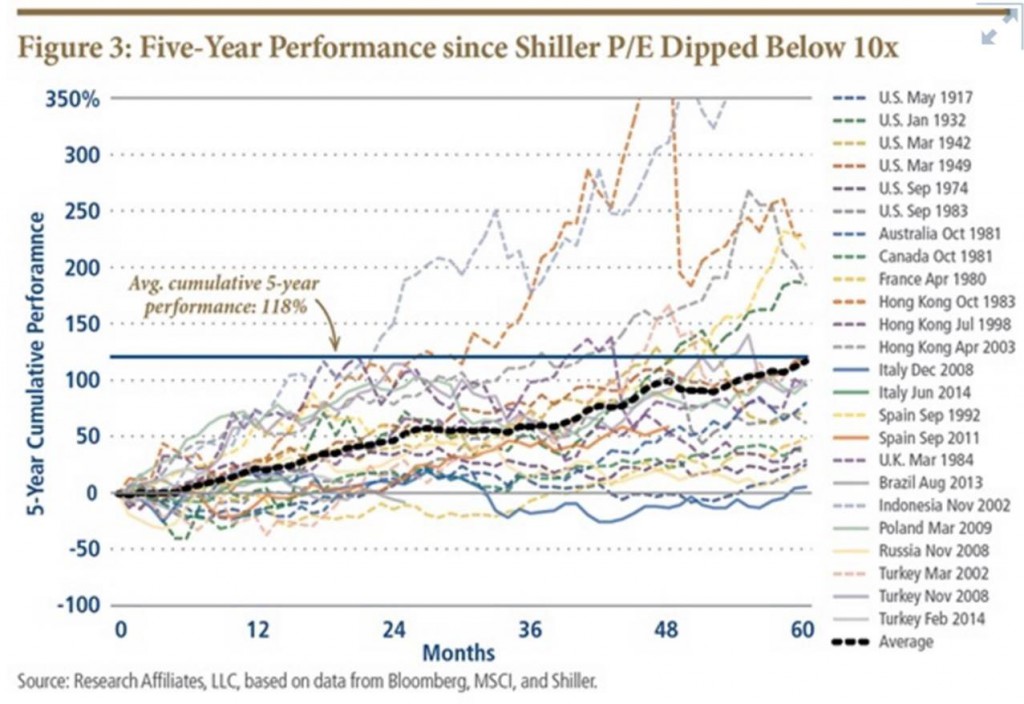