Will Danoff, the manager of Fidelity’s $108 billion Contrafund– the biggest actively managed stock or bond mutual fund run by a single person—believes that “humans have fundamental investing advantages that no machine will ever replace,” writes Jason Zweig of The Wall Street Journal.

Since taking over the fund in 1990, Danoff has averaged a 12.7% annual return (outperforming the S&P by nearly 3% per year).

However, over the past five years, writes Zweig, Contrafund has been “struggling,” trailing the market by just over a half a percentage point per year. But Danoff believes he will manage through. “For the average active manager,” he says, “the index has been tough to beat in the last five or six years as central bankers have moved interest rates to extraordinarily low levels.”

Trained by the formidable Peter Lynch, Danoff applies a decidedly hands-on approach to his work. According to Zweig, the fund manager estimates having met with over 35,000 companies over the past 25 years and has recorded notes from each meeting in a series of dog-eared spiral notebooks. He explains his philosophy: “The more companies you see, the more opportunities you will find.”

So far this year, Zweig reports that Contrafund has underperformed the market by just over three percentage points leading to a withdrawal by investors of $4.5 billion (according to Morningstar estimates). Danoff says, “I feel good that most of my shareholders have stuck with me.” This positive attitude extends to his general view on active management: “By casting a wide net, and being flexible and willing to admit and learn from mistakes,” he says, “active managers at big firms can beat the index over time.” As for portfolios based on ETFs rather than stock pickers, Danoff quips, “If someone can replace Contrafund with a [computer] model, God bless ’em.” 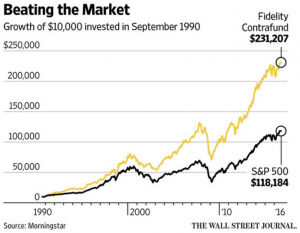