While Warren Buffett’s track record is appealing to large private equity firms, his buy-and-hold strategy (averaging 10-20 years rather than the hedge fund industry norm of 3-5 years) can be hard for many to adopt, according to a recent Bloomberg article.

“To play,” the article says, “they would need to give themselves lots of time—decades, in fact—and as near-to-permanent capital as they could muster. Ambitious buyout firms bet that by raising long-duration funds, they would finally have the patient capital to do those eye-watering megadeals they’d been coveting.”

Some of the biggest hedge fund firms (such as Carlyle Group, Blackstone Group, and KKR) have considered building long-duration private equity businesses, according to the article, as well as global investors who are “scrambling for a way to deploy billions upon billions of dollars” in the private equity market. But adopting Buffett’s approach isn’t a slam dunk strategy, it says, adding, “only a few managers have found themselves equipped well enough to even attempt to play in his league.” 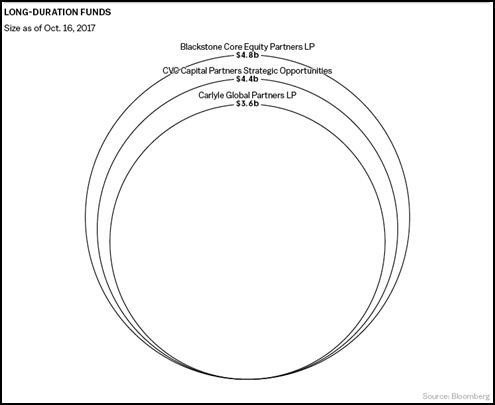 According to Carlyle co-head Tyler Zachem, however, the push is easier said than done. “It’s a big ask to go to LPs to lock up their money for 10 years,” he says, “let alone something well beyond that.” The article also quotes Jim Treanor of Pavilion Alternatives Group who says, “I think it will be a very limited number of people who can raise a fund of this duration.”

4 Facts to Know about the Election and...