The inverse relationship between gold and stocks has never been this pronounced, according to an article in this week’s MarketWatch. However, it also references analysts’ opinions that the two may soon “be poised to rise together as both can benefit from low yields.”

Motley Fool’s Sean Williams recently wrote that according to FactSet data, the negative correlation between gold futures and the stock market recently hit minus 0.63 (a factor of minus 1.0 would indicate that the assets move in the completely opposite direction from each other). By comparison, the historic average correlation has been minus 0.06.

The MarketWatch article says month-to-date gold futures have lost nearly 1% while the S&P 500 SPX is up 0.7% (during the same period). A recent CNBC article offers the following chart to illustrate historic correlation between the two assets:

Gold traders are waiting to hear a hint of rate hike plans during Janet Yellen’s Jackson Hole speech today, as higher interest rates could boost the dollar and render gold a less competitive investment. However, says Adam Kook, president of Libertas Wealth Management Group, it should be noted that gold still “qualifies as a flee-to-safety investment for those worried about the state of the economy and the markets.”

Motley Fool’s Williams contends that, despite the present negative correlation, both markets could advance due to continued low yields. “Low opportunity costs,” he writes, “should precipitate continued interest in the shiny yellow metal in the years to come.” 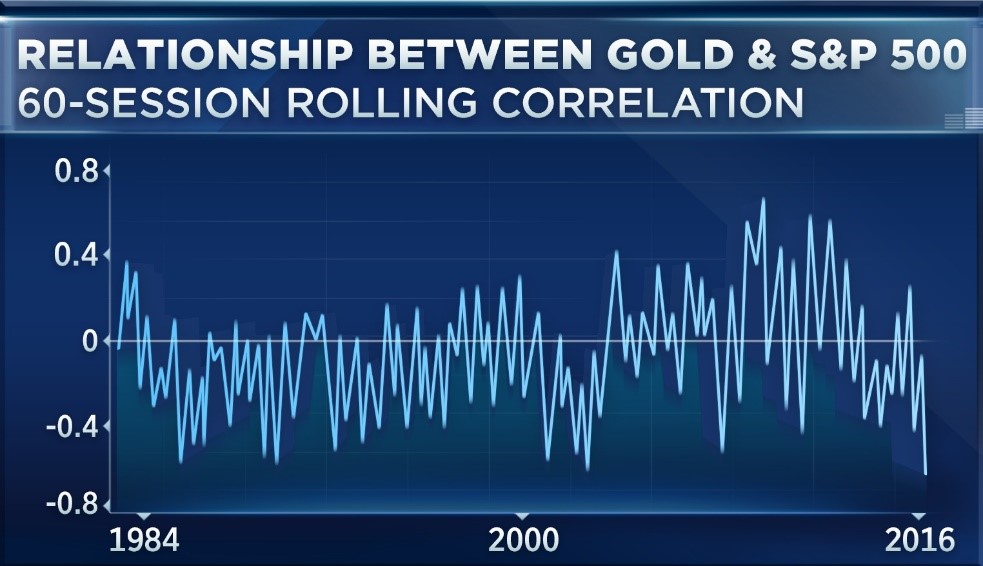