In a phone interview with Bloomberg earlier this month, Jeffrey Gundlach said, “This is not the time period where you say, ‘I can buy anything and not worry about the risk of it’ The time to do that was 18 months ago.”

The DoubleLine Capital LP co-founder and CEO, the article says, “sees too much of a good thing—and he wants no part of it.” He views risky assets such as junk bonds and emerging-market debt as overvalued, and shares the opinion of Oaktree’s Howard Marks that the markets have become too bullish.

Gundlach told Bloomberg that he wants to control DoubleLine’s size, that bigger isn’t necessarily better, and that he has been turning away institutional dollars. His firm, he says, may “stop marketing altogether once assets reach $150 billion, up from $110 billion today.”

What Gundlach wants to do, he told Bloomberg, is to diversify the assets under management rather than grow a single fund. “I don’t want one $150 billion fund,” he said, “I want ten $15 billion funds.” 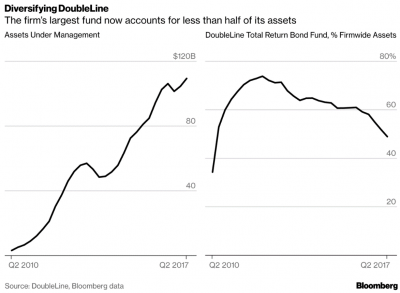 The article cites comments by fund researcher Todd Rosenbluth of the firm CFRA, who says that DoubleLine’s funds continue to outperform their peers which attracts investors, notwithstanding the fact that the firm’s fees aren’t particularly low. “As long as the firm follows the same approach and delivers the same return,” says Rosenbluth, “I think investors are going to be very pleased.”

Gundlach summarizes his concerns: “Volatility is about to go up. That’s my highest conviction trade right now.”