A recent Bloomberg article takes a look at the influence on share prices caused by the comments of hedge fund “stars” at the industry’s three biggest annual events: Robin Hood, the Sohn Investment Conference in New York and the SkyBridge Alternatives Conference (SALT).

“While the managers’ pronouncements consistently moved shares of the companies they targeted,” the article says, “their influence has been on the decline.” It outlines findings as illustrated by movement of stock price (intraday shifts between high and low prices on the corresponding conference day) compared to that of the entire year.

The analysis also measured which managers have the most influence: “Activist Keith Meister, a protégé of billionaire investor Carl Icahn, leads the pack,” according to the article. 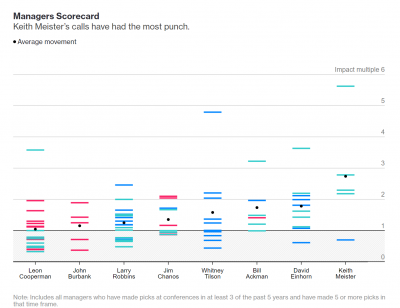 Even though the expert “calls” did move stock prices, the article said many were “duds. All managers, except Bill Ackman, who gave five or more presentations during the five-year period made at least one recommendation that didn’t move a stock more than it might have on any other day.”

Morningstar: When The Chips Are Down, Active Investing...

Market Still Not Priced For Recession