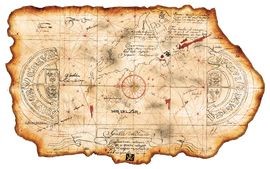 Ok, just to be clear there are no real hidden secrets in Warren Buffett’s Annual Berkshire Hathaway shareholder letter (download the full letter here). You won’t find a map, like the in the movie “The Goonies”, leading you to Berkshire’s $116 billion cash hoard aboard some pirate ship. You won’t even find any hint on who Buffett is going to pick as a successor. Sorry to disappoint you.

But maybe we’ll uncover something even more valuable. That is, there are lessons within the letter that can be drawn from the Oracle of Omaha’s writing, wisdom and investment and business philosophy. In this post, I’ve tried to highlight some of the more interesting takeaways from the letter that you may not read about in the mainstream media reporting but that are relevant to many long-term investors and those interested in Buffett and Berkshire.

Buffett has a number of important criteria when making acquisitions or large scale purchases. One of the most important ones is the price he pays. In order for Buffett to buy, it needs to be at a “sensible purchase price.” When Berkshire evaluates a purchase, it is always done on an all equity basis, which means they don’t consider borrowing money to do a deal. This is a very conservative view on making acquisitions, and Buffett acknowledges that little use of leverage has been a drag on returns, but that cautious approach has served Berkshire well for over 50 years. Buffett is highly disciplined and patient, and he’ll wait for values to get more attractive before making a move. In the meantime, he writes “we will stick with our simple guideline: The less the prudence with which others conduct their affairs, the greater the prudence with which we must conduct our own.”

As an investor, you are trying maximize your return given a certain level of risk, and valuations play an important part in that risk/return equation. Generally speaking, higher valuations lead to lower future returns and lower valuations increase future expected returns. Understanding this seesaw of valuations and returns is important for any long-term investor. I also think investors can be well-served by taking a conservative and realistic view of their own future returns and by following an investment strategy that works for them (vs. being influenced or brought into something that doesn’t fit their own style).

If you read the letter you can tell that Buffett loves the insurance business — as he should. The chart below shows the various insurance related holdings within Berkshire, with GEICO being the largest in terms of headcount.

In the letter, Buffett explains the concept of “float”, which is essentially the premiums that belong to others and are earmarked toward future claims. But float, as Buffett points out, can be invested and the profits (i.e. interest, dividends and gains) that come from those investments are owned by Berkshire. In 1970, the total float Berkshire’s insurance ops generated was $39 million. As of the end of 2017, the total float was $114 billion. The insurance operations have “powered Berkshire’s growth” over the last five decades, according to Buffett. 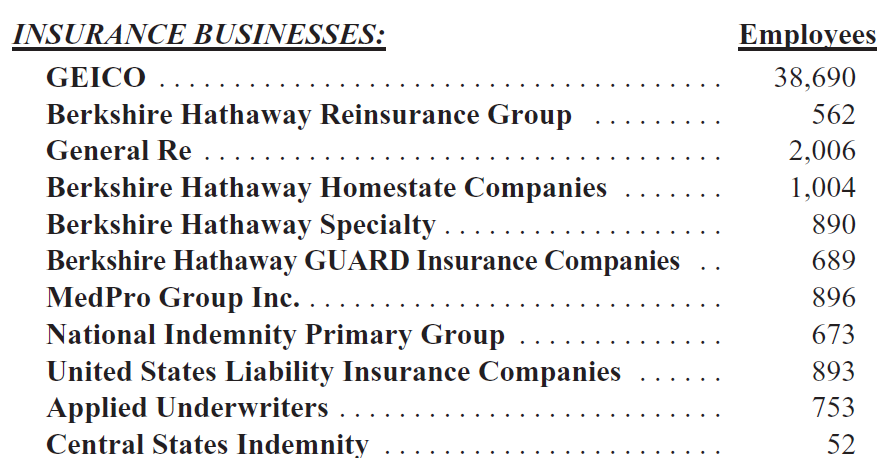 Buffett goes on to make an interesting point – during major financial crises, there is the potential for “runs” on the bank where depositors withdraw money and fear starts to snowball and feed on itself. Unlike banks, however, the property and casualty float can’t be withdrawn. Berkshire’s massive float in turn becomes protected and as a result, Berkshire, during times like the Great Financial crisis, (which take place once every 50-75 years) the company isn’t reliant on outside capital or funding sources. As Buffett states, “we have intentionally constructed Berkshire in a manner that will allow it to comfortably withstand economic discontinuities, including such extremes as extended market closures.”

What the “Gory” Details of Berkshire Stock Can Teach Us

Name the last CEO of a publicly traded company that lists their stock’s worst periods of performance or biggest losing years. I can almost guarantee you won’t be able to find one. But maybe Buffett is on to something here, and more corporate CEOs will share stats like this to help their investor make it through the times when their stocks falter.

The chart below, taken directly from his letter, shows the four worst declines for Berkshire stock. For all intents and purposes, there have been three declines of nearly 50% or more and one decline of 37%. The point Buffett drives home with this is investors should never use borrowed money to invest in stocks. An investor who uses debt to buy stock and then experiences these types of declines, which Buffett says “will” happen in the future at a point that no one can predict, has the potential to be forced out of the position.

The second table shows the performance of Berkshire’s stock. From 1965-2017, the return of the shares are 20.9% annually compared to 9.9% for the S&P 500. An investor who buys with debt and gets shaken out during one of these downdrafts will lose out on this long term upside over time.

In 2007, Buffett made a bet with a hedge fund of funds manager that over a 10 year period (2007-2017) a simple investment in a low cost S&P 500 index fund would outperform a group of highly skilled, and expensive, hedge fund managers. Buffett’s belief was that simplicity and low cost would win out over possible investment skill, activity and high costs. As most know, Buffett won the bet by a large margin. The S&P 500 gained 8.5% annually, while the five managers in the hedge fund basket returned about 3% per year. As Buffett writes, “Performance comes, performance goes. Fees never falter.”

But he goes to make the point that from to time to time the markets “do crazy things.” Capitalizing on these opportunities, when they present themselves, requires a certain mindset. Buffett writes:

“Seizing the opportunities then offered does not require great intelligence, a degree in economics or a familiarity with Wall Street jargon such as alpha and beta. What investors then need instead is an ability to both disregard mob fears or enthusiasms and to focus on a few simple fundamentals. A willingness to look unimaginative for a sustained period – or even to look foolish – is also essential.”

So immediately following the financial crisis fears and emotions got the best of many investors, and as a result they anchored to the market’s recent decline thinking stocks didn’t offer the long term growth potential they did. But stocks still ended up producing a return that was about in-line with historical norms even when you included the declines of the 2008/2009 bear market. Next time the markets are going crazy and investors are cashing out, try to remember this lesson from Buffett as it will serve you well.

Buffett explains the purpose of investing. As an investor, he says, you are foregoing consuming something today with your money and investing it with the goal of greater consumption down the road. “Risk”, says Buffett, “is the possibility that this objective won’t be attained.” While stocks are risky in the short term, over long periods of time, Buffett writes, a well-diversified portfolio of U.S. stock becomes “less risky” than bonds (assuming reasonable valuations and interest rate levels). He points out that very long term investors, such as institutions, should not measure the risk of their portfolio in a way that compares stock to bond exposure.

Many investors focus on the here and now when investing in stocks, when in fact they need to be thinking 10, 15 or 20 years down the road while ignoring the short-term market fluctuations. Having an overweight position in bonds could actually increase your risk because there is a possibility you won’t achieve the objective of being able to afford the required consumption in the future.

Berkshire’s business is truly amazing when you think about it. Below is a sampling of the businesses owned and operated by Berkshire (with a complete list of operating companies below that). There is no way that Buffett can keep up on all these operations, which may be the whole point of his philosophy. His approach centers around buying good companies with good managers at what are fair and reasonable prices. And then he lets them run and operate independently with their own cultures and missions.

Berkshire at a Glance 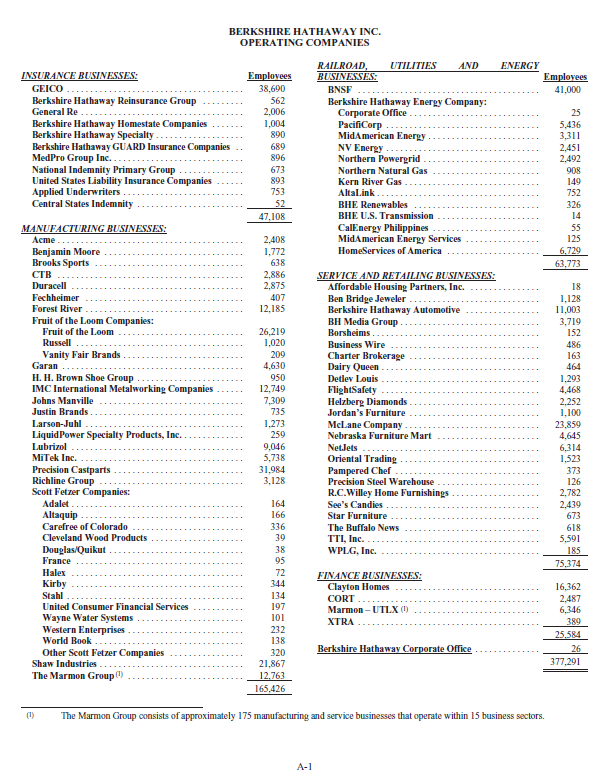 No hidden treasure, but lots of great lessons hiding in plain sight!