We’ve written often about the role that human behavior plays in investing. While logic and reason are contributing factors, emotions hardly take a back seat. In a recent issue of Enterprising Investor, Shreenivas Kunte, CFA, shares some perspective on the different degrees to which buying and selling take an emotional toll on the investor. 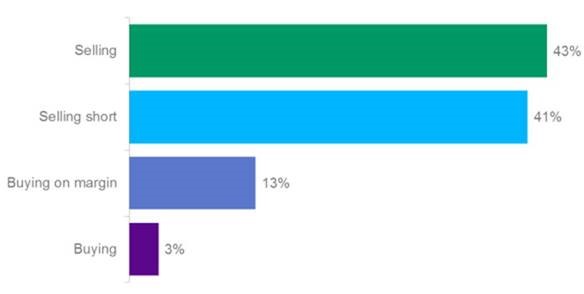 Human emotions, Kunte explains, originate in our “reptilian”, or less-evolved brains. We are hard wired to avoid the negative and seek out the positive. As a result, the interplay between emotions and actions can force us “away from logical, realistic choices.” When CFA Institute readers were asked which investment activity caused the most emotional difficulty, Kunte found some interesting results:

Clearly, the vast majority of respondents found selling to be the most trying. Kunte explains that this reflects the “endowment effect”, in which we tend to overvalue what we own even if our assets prove to be undesirable. Buying in general was considered much less taxing emotionally (with margin buying being the more difficult of the two). According to neuroscientist Antonio Damasio, human beings “are not either thinking machines or feeling machines, but rather feeling machines that think.” Listening to and interpreting our emotions around buying and selling, writes Kunte, “influences our choices and helps lead to well-deliberated investment outcomes.”