Certainty is often seen as a sign of strength in life. When someone is telling us the best course of action within their field of expertise, we want them to do so with a level of conviction that implies no other outcome is possible than the one they are telling us is going to happen.

Think about it. You bring your car into the shop, you want to know definitively what the problem is. If you go to a doctor, you want a diagnosis as to what is wrong.  In many parts of our daily lives, we seek out opinions from those people who have expertise in specific areas. We expect these advice-givers to have conviction in their ideas and responses. They are the experts. And we expect clear answers.

Conviction in Ideas and Outcomes

Conviction can also be a positive thing in areas where outcomes are much less clear. For example, take the world of startup companies. When you listen to founders being interviewed, they will talk as if there is no other possibility other than the one in which their company will change the world, despite the fact that at the current time they have no profits, no revenue and no business, and despite the fact that the odds are clearly stacked against them. There was a great example of this “high conviction” mentality on a recent podcast that Patrick O’Shaughnessy did with the founder of Ladder, a startup in the exercise space. The founder and a couple of venture capitalists were discussing potential exit strategies for the company and the hypothetical question came up of whether a sale of $20 million would be considered a success. Both the venture capitalists and the founder agreed that would not be a successful outcome even though that outcome would clearly result in a profit that far exceeded what had been put into the company at that point.

That may seem counterintuitive to you and me, but in the world of startups, that is the mentality you have to have. To accomplish things that most people see as impossible requires a level of conviction that doesn’t allow for logically analyzing the odds. It requires convincing yourself and others that you know what the outcome is going to be and that other outcomes aren’t even worth considering.

Different Mindset for the Stock Market

Investing in the stock market requires a very different skill set, though. Conviction certainly sells in investing. Just like most other areas of life, investors naturally migrate toward people who are willing to tell them they “know” what is going to happen, especially in the short-term. If you don’t believe me, just watch CNBC. Throughout the day, you will see a variety of market experts come on and tell you where the market, individual stocks, and other asset classes are going over short periods of time. They will tell you it with such conviction that you want to believe them. They will say it with such certainty that you won’t envision any other outcome being possible, just like successful founders of startup companies do. But unlike the startup world, where that level of conviction from founders is an asset, in investing, it is a significant liability. The reason is that they are trying to predict something that massive amounts of historical evidence suggests is not predictable in the short run.

As an investor, you want to run as fast as possible from that type of short-term certainty. To invest successfully, it is essential to understand that outcomes over periods of five years or less are much more likely the result of luck than skill. They are much more likely noise than signal.  Predicting short-term outcomes is a losing game. The key to investing is a have a long-term plan that is based on evidence and then to show unwavering conviction in the short-term in pursuit of that plan. Having conviction long-term is great and a key to success. Taking action in response to the short-term conviction of others is the opposite.

I like to look at investing as a game of odds where the long-term odds are stacked in your favor, but the short-term odds are no different than a coin toss. We can say with an extremely high level of conviction that stocks and bonds will produce a positive return over the next 20 years. Why? Because neither has ever had a rolling 20-year period in history where they lost money in nominal terms. We can say with fairly high conviction that the stock market will be higher 10 years from now because historically, the stock market has made money in most 10-year periods. When you go down to one-year periods, it becomes pretty much a crapshoot and the range of returns is all over the place. 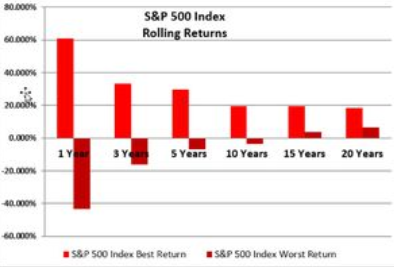 Don’t be Blinded by Certainty

The same principle holds for different segments of the market. Value stocks have struggled for a long time now. By most measures, the current period of value underperformance is one of the longest ever. But does that allow me to say with conviction that value stocks will rebound this year or next year? Not at all. What it does allow me to say is that if history is any guide, the next decade for value stocks relative to growth is likely to be much better than the previous one. But that says nothing about when things will turn around.

Pretty much every aspect of investing works in the same way. Followers of the market want to see confidence in those who manage their money. They want to see market calls that make them money right away. They want to draw conclusions using short-term results. But that just isn’t the way it works. I have spent a lot of time studying the best investors throughout history. They all share one characteristic – they focus much more on what they don’t know than what they do. If the best investing minds all do that, then you and I should too. Next time you think you see the short-term market future with certainly, take a step back first. Think about what you really know and what you don’t. Think about the other side of the argument that your biases are likely preventing you from seeing. Despite our natural inclination to want certainty, being uncertain is often what leads our minds to work best and produces the best decision making. It also is likely to lead to better investment returns.