At Berkshire’s Hathaway’s annual meeting, Warren Buffett announced he had purchased approximately 75 million additional shares of Apple. Apple is already Berkshire’s largest holding, and the purchase will make Buffett an owner of roughly 5% of the company. With a current market cap of $940 billion, this makes Berkshire’s stake in Apple worth close to $45 billion.

His massive stake in the company shows he strongly believes in the competitive moat around Apple’s business. Buffett has a knack for buying firms that long stay dominant in their markets. Buffett even went so far as to give praise to other tech heavyweights, including Amazon and Google, saying he missed an opportunity by not investing in both of those companies, thus an acknowledgement of their leading competitive positions. Historically, Buffett has shied away from technology companies given the rapid changes and disruptions that can influence a firm’s long term earnings stream and predictability, but his views have obviously changed as the tech industry has matured and as leaders have emerged.

On the surface, finding leading companies seems easy. Take the S&P 500. Apple, Microsoft, Amazon, Facebook and Google are the largest firms in the S&P 500 — collectively they make up roughly the first 15% of the index. Many investors have a strong belief that these tech stalwarts will continue their dominance well into the future.

Buying stocks based on what you “believe” is not a recipe for success for most investors though.  Rather than relying on beliefs, we think investors stand a much better chance for success when they are evidenced-based and quantitative in their investment process. As the data below points out, industries in the U.S. are becoming more concentrated and the leading firms in those industries are becoming larger, more profitable and can be superior investments. One way to find these leading companies, quantitatively, is to look for companies in consolidating industries that are effectively growing their businesses and becoming more profitable.

In a paper titled, Are U.S. Industries Becoming More Concentrated?, by Gustavo Grullon of Rice University, Yelena Larkin of York University and Roni Michaely of Cornell University, the researchers report that “75% of U.S. industries have registered an increase in concentration levels over the last two decades. Firms in industries with the largest increases in product market concentration have realized higher profit margins, positive abnormal stock returns, and more profitable M&A deals, which suggest that market power is becoming an important source of value”.

What the report show is the dominance of handful of companies is not just limited to the technology sector. Last year, WSJ’s Jason Zweig wrote a column highlighting that more and more power is moving into the leaders. Much of the research cited pulled from the Grullon, Larkin and Michaely study. Zweig shared the following stats:

Some of these trends may be responsible for the shortening of the average S&P 500 life span. Mergers and acquisitions, where the big buy the smaller or the smaller get squeezed out by the bigger, could be at play here. According to research by Credit Suisse, which was reported on CNBC.com, the average age of companies in the S&P 500 was 60 years in the 1950s, but now is only 20 years. 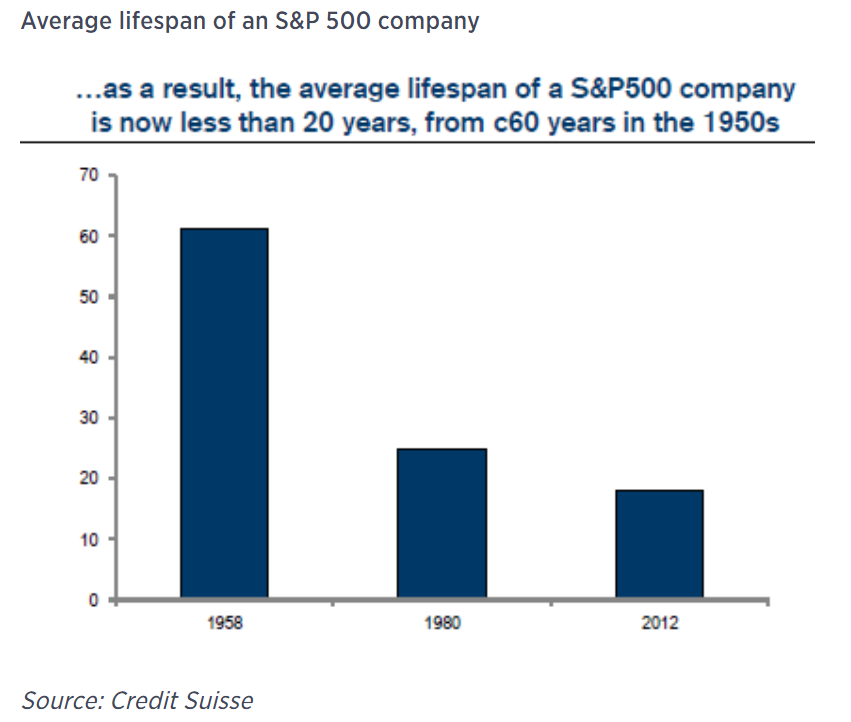 One quantitative method for determining if an industry is concentrated is to use the Herfindahl-Hirschman Index (HHI) Index. The HHI is a simple formula, which takes the market share, in terms of sales, across each firm in an industry and sums the squares of that figure to determine the concentration factor. For example, say you had two firms in a given industry. One firm has an 80% share, while the other has a 20% share. The HHI would calculation would be 80^2 + 20^2, or 6,800.

Since the early 1980s, the U.S. Department of Justice along with other government agencies and states have used the HHI index as a way to determine if mergers and acquisitions have the potential to create too much industry concentration.

The three tables below show examples of how the HHI index works. Using three different industries, we can see that industry 1, with an HHI of 1000, has low concentration. Industry 2, with a score of 1550, has moderate concentration, while Industry 3, with a bunch of small firms and then one firm with 50% market share, has a high level of concentration. The data in the tables below was obtained via Herfindahl-Hirschman Index Calculator on the University of North Carolina’s School of Law website.

In his article, Zweig wrote that “while companies as a whole grew more profitable over the past 20 years, the winners became vastly more profitable — nearly doubling the gains they got on each dollar of sales.”

In their study, Grullon, Larkin and Michaely found “that a change in concentration from the 25th to the 75th percentile leads to an increase in ROA of about 32.3% relative to its median … Thus, this analysis points to a significant structural shift starting at the turn of the 21st century in the economic relation between industry structure and firms’ profitability.”

This makes intuitive sense in that more concentration can crowd out competition, thus allowing firms to gain more share, utilize their asset base to drive more sales, increase prices (due to less competition) and effectively become more profitable.

The implications from an investment standpoint was driven home in a back test from the researchers’. Buy buying the “industries where the top companies were growing more dominant, while betting against sectors whose top firms were becoming weaker, you would have outperformed the overall stock market by an average of roughly nine percentage points annually between 2001 and 2014.”

We have created a quantitative model based on the strategy outlined in this paper. Using our implementation of the Industry Leaders models, we have identified a few industries, and firms within those industries, that are showing signs of consolidation. This is by no means a list of stock recommendations, but rather an idea set to give you an example of some of the industries that may be off the radar but are showing signs of less competition, which could imply good investment prospects for those firms gaining share.

One thing market history teaches us is no business stays king-of-the-hill forever. But the evidence would suggest that there is an overall trend towards more, not less, industry consolidation, and the competitive moats and cash hordes of companies like Apple make it even more difficult for upstarts to dethrone them. Investing in that environment may require a different set of thinking than the way we have thought about things in the past.

It Pays To Automate Your Finances

The Best Portfolio For A Bear Market

Mike Green on the Dangers of the Rise...