Interest rates have a significant impact on security prices, according to an article by Morningstar’s Alex Bryan, CFA, the firm’s Director of Passive Strategies Research, North America.

Bryan writes that, unlike bonds, which have a finite life and fixed cash flow, the impact of rates is more difficult to anticipate for equities. He explains his theory that firms that are “more sensitive to the business cycle tend to experience greater cash flow growth during economic expansions” and, therefore, should do better in a rising rate environment.

Bryan discusses his research that shows high-dividend-yielding stocks, those stocks in more defensive industries, and large caps tend to be more interest rate-sensitive than lower-yielding, smaller and more cyclical stocks. He extended this research to gauge the degree of interest rate-sensitivity in the various groups by evaluating performance of certain low-volatility indices. His findings show that both tended to “underperform the market (represented by the Dow Jones U.S. Total Stock Market Index) when rates were rising and to outperform when they fell.” 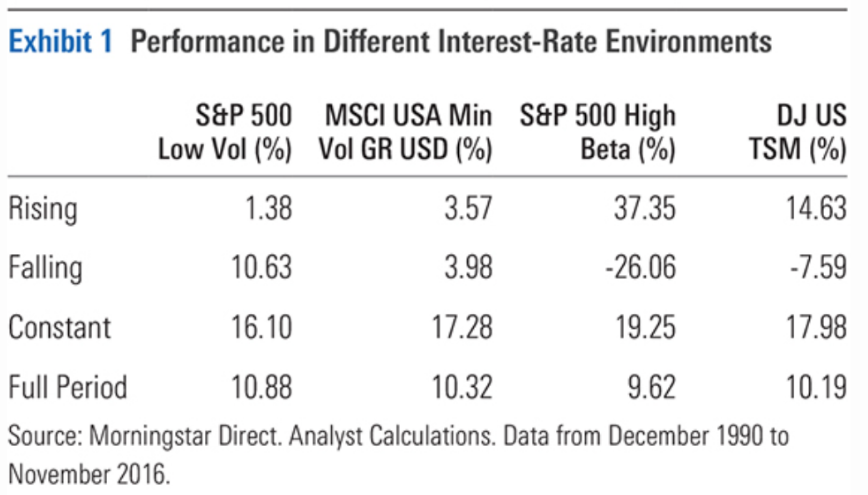 Consistent with Bryan’s expectations, his research also showed that the converse is true—the highly volatile S&P 500 High Beta Index tended to “outperform the market when rates rose and lag when they fell.”

Still, while his theories were supported by research data, Bryan concludes that, “while rising interest rates could create a headwind for low-volatility strategies, many of them are still good long-term investments. These strategies have tended to hold up better than the market during downturns and, despite their interest-rate sensitivity, bounce around less than the market.”