The Fairholme Fund, which was launched in 1999 by Bruce Berkowitz, has seen investors pull out more than $16 billion over the past six years due to poor performance, an exodus that is raising liquidity concerns. This according to a recent article in The Wall Street Journal. 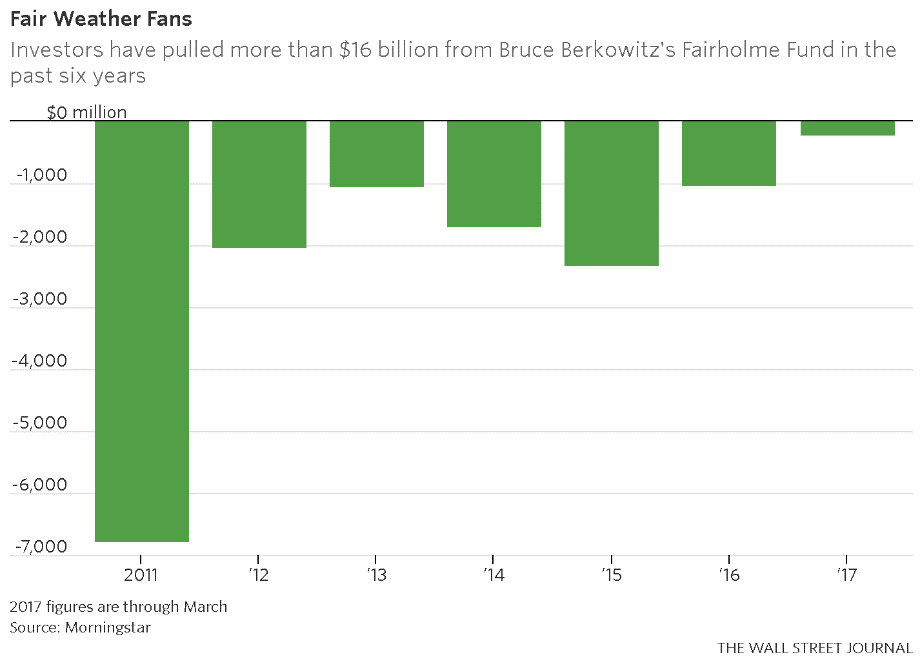 Morningstar estimates show the large-cap value fund has “shed assets every month since March 2011” and is now a “shadow of its former self,” according to the article– which cites comments by Morningstar analyst Kevin McDevitt concerning the fund’s increased liquidity risk in the wake of steady outflows and forced sell-offs. McDevitt’s concern, the article says, is around how quickly it can liquidate assets should “outflows accelerate amid a market dislocation.”

According to WSJ, a spokesman for the Fairholme fund rebuts these concerns, saying a “significant portion” of fund assets is held by long-term clients, and approximately 23% of its assets are in cash and cash alternatives (up from 14.4% at year-end 2016).

While the fund’s long-term performance remains “quite impressive,” the article says the fund has “stumbled badly over the shorter term.” In September, Morningstar downgraded it analyst rating on the fund from silver to neutral based on liquidity concerns. The holdings that remain in the fund after recent sell-offs have left it more concentrated and perhaps more volatile, says McDevitt. “There are still a number of levers Berkowitz can pull,” he says, “but he doesn’t have anything like Berkshire Hathaway in the portfolio anymore.”

The October Witch: Pain in the Short Term...

Low Volatility Investing and the Conservative Formula with...

Looking at the Rise of Money Losing Companies

Icahn Says The Worst Is Still To Come

3 Ways To Cash In On Cash