A recent article by John Rekenthaler of Morningstar begins: “Economic predictions are wonderfully useful…after the fact.” He discusses hindsight bias, and how “history gives a simple picture of that which was once complex.”

To illustrate his point, Rekenthaler shares the results of a Merrill Lynch survey of 200 institutional investment managers across the world on various items to gauge their views on the biggest “tail risk”—that is, the item most likely to have caused a global-market meltdown. Rekenthaler condenses seven years’ worth of responses which, he explains, contained 18 noteworthy tail risks: 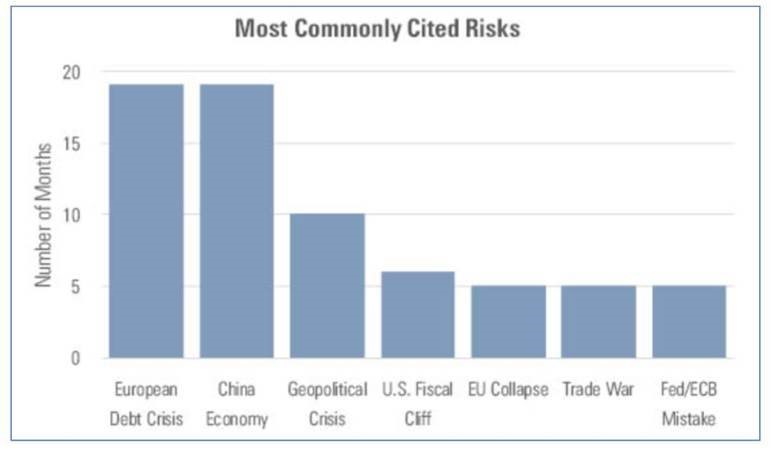 “The lesson is straightforward,” writes Rekenthaler, adding, “Ultimately, none of these economic discussions mattered.” He says that individual investors who “created strategic asset allocations in 2011 and who were content to do nothing more than rebalance periodically, fared just as well as those who spent several hours each week following the latest economic news.”

Rekenthaler concludes: “I do not see how individual investors (including your author) can profit from economic analysis. Strategic asset allocation doesn’t sound terribly appealing: ‘Close your eyes and keep doing the same thing.’ But as Winston Churchill said of democracy, strategic allocation is the worst form of investing, except for all the others.”