Wells Capital’s James Paulsen thinks that the “great Fed myth” about the stock market rally being a “sugar high” will soon be debunked. Paulsen tells Bloomberg he thinks the market’s moves this year have mainly resulted from increased confidence, not the Federal Reserve’s policies, evidenced by rising price/earnings multiples. CEOs remain hesitant, however, which has limited capital spending. Paulsen thinks part of their hesitance is a concern that the Fed, which has continued its quantitative easing programs well after many have believed the economy can stand on its own, may know something they don’t. If the Fed starts shows confidence and starts tapering, he thinks that corporate confidence may also increase, which will lead to more capital expenditures. That’s in part why he likes the technology and manufacturing sectors. Paulsen also talks about why he thinks the dollar will fall, not rise, when the Fed starts tapering. 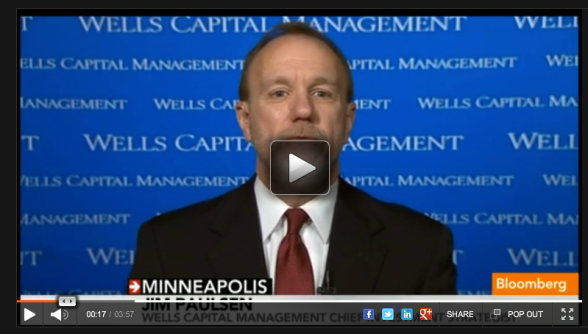 Passing on Seth Klarman: Doubts Rise About the...

Watch Out if Bond Yields Rise in this...

Stocks Have Room to Run, According to New...