Dan Ivascyn, successor to Pimco co-founder Bill Gross as the firm’s investment chief, is overseeing what is characterized in a recent Wall Street Journal article as “a new direction taken by the California money manager as it recovers from the most tumultuous period in its history.”

Gross resigned from Pimco in September of 2014 in the wake of much unrest. The article explains, “Hundreds of billions in client money followed Mr. Gross out of Pimco,” but Ivascyn was able to “stop the outflows with a team of managers who oversees more than $1.5 trillion—one of the largest asset pools anywhere in the world.” Inflows, it adds, have exceeded outflows for three quarters running. 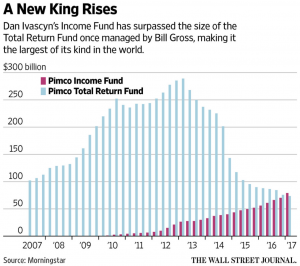 Among the many changes ushered in by Ivascyn with respect to Pimco’s corporate climate is the new chief’s reliance on the skill sets of individual portfolio managers to find profitable trades, says WSJ. “Under Mr. Gross,” it says, “managers more closely followed directives set by broad investment calls.”

Ivascyn, who came from humble beginnings, rose in the ranks following his hand in the firm’s ability to weather the storm of the financial crisis. In early 2008, according to WSJ, Ivascyn “directed a team of temps to scour the offering documents of scores of bonds linked to souring mortgages. The research helped Pimco  determine which bonds were more or less likely to meet their obligations to investors.” This research formed a foundation of confidence for Ivascyn and spurred him to invest heavily in bonds that “stood to snap back in value as the economy stabilized.”