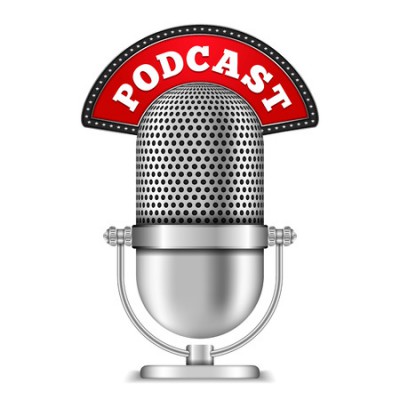 Before I get into my favorite episodes this week, I just wanted to quickly discuss the glaring omission from the list. Part II of Patrick O’Shaughnessy’s Hash Power audio documentary is every bit as good as Part I and I strongly suggest that anyone who wants to learn about the complicated subject of cryptocurrency and the Blockchain listen to it. I didn’t feature it here because I don’t want to continue featuring the same documentary each week, but the latest episode certainly did not disappoint and I recommend you listen to both episodes if you haven’t already.

Now on to my favorite podcasts for this week.

Artificial intelligence and machine learning will both have wide reaching impacts on our society that none of us can likely comprehend at this point. The effects on the economy and investing are already being felt and will grow exponentially over time.

Martin Ford is the author of Rise of the Robots and an expert in the field, so his take on this revolution is worth listening to. The financial impact of AI is one of the most interesting areas of it because it has the potential to make massive changes to the economy.

As Martin points out on the Podcast, technological change has historically been a positive for economic growth, but the potential for machines to replace people with AI raises some interesting questions about whether the relationship won’t be as positive going forward. There is also a possibility that this will further economic inequality and lead to more concentration of wealth and income in the hands of fewer people, which as he points out on the podcast, has significant implications for economic growth.

And both current workers and new entrants into the workforce need to confront the reality that AI may dramatically affect how many jobs are done and likely will also eliminate some jobs entirely. So anyone starting a career today has to at least ask themselves how AI will impact it and whether that career may even exist ten years from now.

There is so much other great discussion about AI in this podcast and I can’t cover it all here, but even if you’re not into computers or are a novice in the area of AI, I recommend you listen to it because all of us will be affected by this, whether we like it or not.

Since my day job is investing in equities, I enjoy using podcasts to expand my knowledge in other areas of investing. Fixed Income is one of my primary areas of interest because what goes on in the bond market has so much to do with the stock market and the economy.

This interview with Jeffrey Sherman, who is the Deputy CIO of DoubleLine, is a great one because it discusses some of the major concepts that affect what is currently going on in the bond market in a simple and understandable way.

Perhaps the most discussed issue in fixed income these days is the policies the fed has undertaken to lower interest rates and what the implications will be as that is unwound. This episode starts out with some details about that issue and the impacts both in the US and abroad, where some of the current policies are contrary to what the Fed is doing.

Another interesting discussion here centers around how rising rates do not necessarily lead to losses for bond investors and a formula that can be used to gauge the impact of a rate increase on a bond portfolio that looks at not just the loss due to interest rates, but also the yield received during the period. The overreaching point is that if rate increases are gradual over time, bond investors are losing capital due to price depreciation, but also gaining income due to yield and that serves to either minimize or eliminate the losses. The accompanying chart, for illustration purposes only, shows how a change in interests rates (i.e. 1%, 2%, 3% higher rates) impact bond prices over different durations (i.e 1, 2, 3 … 10 years). As is pointed out in the podcast, part or all of this loss would be offset by the yield received during the period. 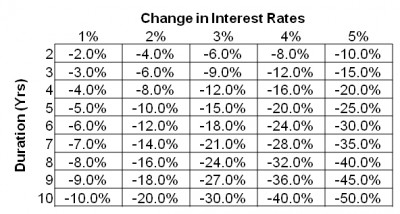 And since Doubleline isn’t just a bond investor, there are also some interesting takes on other areas of the market, including a fund they started that uses a combination of the Shiller PE and momentum to pick industries to invest in and his thoughts on commodity investing.

Capital Allocation is one of the most important areas of running a successful business. Making a profit is obviously a primary driver of any business’ success, but taking those profits and using them in the most efficient way to generate long-term value can be just as important. There are several major things that a firm can do with excess capital. It can pay dividends, pay down debt, reinvest in the business, buy another company, or buy back stock. The decision of which of these to pursue and when to pursue them can have a huge impact on a business’ long-term performance.

For his book “The Outsiders: Eight Unconventional CEOs and Their Radically Rational Blueprint for Success”, Will Thorndike took a look at a group of CEOs whose stocks outperformed both the market and their peers over long periods of time and examined the capital allocation strategies that led to that success.

This podcast takes an in depth look at the results of that study. What is most interesting is that much of the conventional wisdom regarding capital allocation didn’t hold at all when it came to these very successful CEOs. For example, many believe that great CEOs pay dividends, but this study shows the exact opposite to be true. These CEOs tended to avoid dividends or pay much lower than normal dividends due to their tax inefficiency. And when they did pay large dividends, they were typically special dividends that coincided with a period of low tax rates. What was also unique about these great capital allocators was their tendency to use stock buybacks as a means to acquire shares when they were cheap and to limit buybacks when their stocks were expensive.

The lessons from this podcast don’t only apply to investing in stocks, they are also useful for anyone who runs a business and wants to learn how to better allocate their capital.