This article was originally published on March 5, 2018, but the performance and stock list has been updated.

There is no shortage of evidence showing value investing works over time. From the actual track records of great investors like Warren Buffett, Mario Gabelli, Bill Ruane and Tom Knapp, who were inspired by value investing techniques developed by Ben Graham and David Dodd, to numerous tests and academic studies that have been conducted, value investing has proven itself over time.  However, that doesn’t mean that growth stocks should be ignored. In fact, investors should pay close attention to strategies that identify “good” growth stocks. The types of strategies that are built on a fundamental assessment of a company’s financials and business, and are backed up by a performance record that demonstrates the effectiveness and viability of a growth-oriented investment strategy can be very effective.

In 2004, Partha Mohanram, then a professor at Columbia, published an academic paper titled, “Separating Winners from Losers among Low Book-to-Market Stocks using Financial Statement Analysis“. The title of the paper might look familiar to some investors in the value camp because another academic, Joseph Piotroski, published a seminal paper in 2000 on value stocks titled, “Value Investing: The Use of Historical Financial Statement Information to Separate Winners from Losers“.

As Mohanram pointed out in his paper, there is significant academic evidence showing that as a group low book-to-market growth stocks, which he labeled as “glamour” stocks, show negative excess returns. But like Piotroski before him, Mohanram set out to identify a series of accounting and other business related financial metrics derived from financial results that would separate those glamour/growth stocks that had the potential for excess return and from those that didn’t.

Mohanram points out that that on the margin, the market tends to “naively extrapolate current fundamentals of growth stocks” or ignores “the implications of conservative accounting for future earnings” of growth companies. Said another way, investors become overly optimistic about growth stocks and once they disappoint, the shares of these stocks suffer underperformance. It’s these realities, which are largely behavioral for investors, that lead to challenges for growth investing over time. But what if you could find a system that look to counteract these things. Could growth stock investing be improved?

Mohanram, smartly, developed a grading system, called the GSCORE, which effectively scores stocks based on profitability, cash flows factors and accounting policies. The GSCORE is an eight-point scale that is applied to the 20% of stocks in the market with the highest price-to-book ratios. So in his initial cut of the universe, he was looking for the most expensive stocks based on price-to-book.

From there, the investment criteria used by Mohanram can be categorized into three different buckets: profitability & cash flows, business/earnings variability and accounting/spending “conservatism”. The specific criteria are outlined below.

1 — Return on assets (ROA) above the industry median: a profitability factor that measures the return a company is generating from its asset base.

2 — Cash flow generated ROA above the industry median: For growth like firms, cash flow can be more critical than earnings.

3 — Cash flow from operations exceeds net income: This measure attempts to reward firms who are generating cash flow, which tends to be a cleaner number compared to a company’s earnings since earnings can be influenced by creative accounting methods.

4 — Variance of a firm’s return on assets in the past five years below the sector median. This shows that the firm’s earnings are more stable than others in the sector, which is considered a positive.

5 — Variance of year-over-year sales growth relative to that of its sector median. Lower revenue variability is rewarded because it helps weed out those firms who may have negative earnings. Revenue is also a cleaner number vs. earnings, which can be subject to accounting tricks.

Accounting/Spending Conservatism – rewards spending on activities that can help growth.

Firms are given a score of 1 for each of the criteria above that they pass. A firm that passes all eight criteria will obtain a GSCORE of 8, while firms that pass none get a GSCORE of 0. One of the more interesting things with the GSCORE and Mohanram’s approach is he mostly compared a company against the sector or industry median. This approach (i.e. comparing a firm’s result to its sector/industry) is a somewhat unique compared to many of the models we run here at Validea, but Mohanram supports the decision with studies that show the importance of sector/industry context in terms of financial and fundamental analysis.

In the paper, Mohanram conducted a back test from 1979 to 2001 in which he constructed portfolios consisting of high and low GSCORE stocks. The table below shows the results of that study. On average, the low book-to-market stocks that ranked highest using the GSCORE generated a simulated return of 20.3% a year while the lowest scoring GSCORE names put up a -9.2% annualized return. As Mohanram astutely points out, a long/short portfolio going long high scoring GSCORE stocks and shorting low scoring GSCORE stocks could be effective. For comparison purposes, the S&P 500 from 1979 to the end of 2001 had an annualized price return of 11.3%. 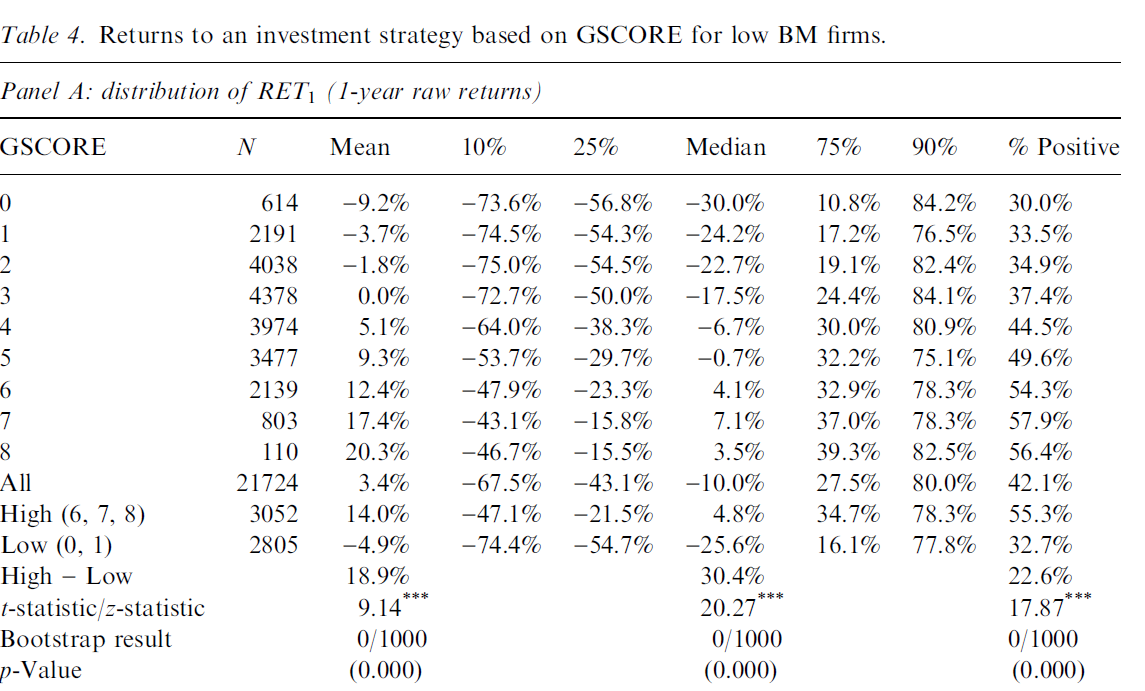 Our Tracking of the GSCORE

Its’s one thing to run a back test and but running a strategy in the real-world can be more challenging. Validea has been running our own internal Mohanram GSCORE model and tested it going back to 2006. Our approach to portfolio construction varies from Mohanram’s test in that we follow ultra-concentrated baskets of securities rather than large numbers of stocks and rebalance using a monthly rebalancing system that focuses on tax efficiency.

In his paper, Mohanram emphasizes that the GSCORE strategy’s robustness is a result of a combination of selecting which stocks to go long (i.e. high GSCORE names) but also which to avoid (low GSCORE names). Our data shows, however, that even on the long only side a concentrated basket of high scoring GSCORE stocks has the potential to deliver significant outperformance over the market.

The two tables below show the returns of our focused long-only GSCORE model since 2006.

A few things stand out:

Since the end of the financial crisis, growth stocks have been in favor over value stocks and we know that our version of the Mohanram model has been a beneficiary of that trend. When the cycle changes, and growth falls out of favor, there is a good chance this model will also struggle, but over time having a disciplined way to separate those growth like companies with favorable financials and fundamentals from those that are less favorable seems like a sound way to go about growth investing both now and in the long term.

Below is a list of the current top-rated stocks using our model based on Mohanram’s GSCORE as of Jan. 16th, 2020. None of these should be construed as investment recommendations in isolation. It is just presented to provide an idea of the type of stocks this model selects.

How Bill Ackman Finds His Targets

As Investors Surge Into Market, Demand For Advice...

Options for Investors Worried About the Future of...