“The search for elusive alpha is sending a handful of computer-driven hedge funds trawling the remotest corners of financial markets,” according to an article in Bloomberg.

A subset of these so-called commodity trading advisers (CTAs) are use a niche strategy to look for “uncorrelated returns and a little extra alpha in anything from cheese and Turkish scrap steel to obscure chemicals or eggs in China,” the article says, but warns that in the past such an approach has been blamed for “amplifying selloffs in some of the most liquid assets, because they tend to rely on similar models.”

As volatility returned to the market this year, the article reports, traditional trend-following funds have increasingly struggled, motivating some investors to switch to “cheaper smart beta funds.” According to Eurekahedge, investors pulled about $14 billion from trend-following strategies this year (after net inflows of about $51 billion in the three-year period ending in 2017): 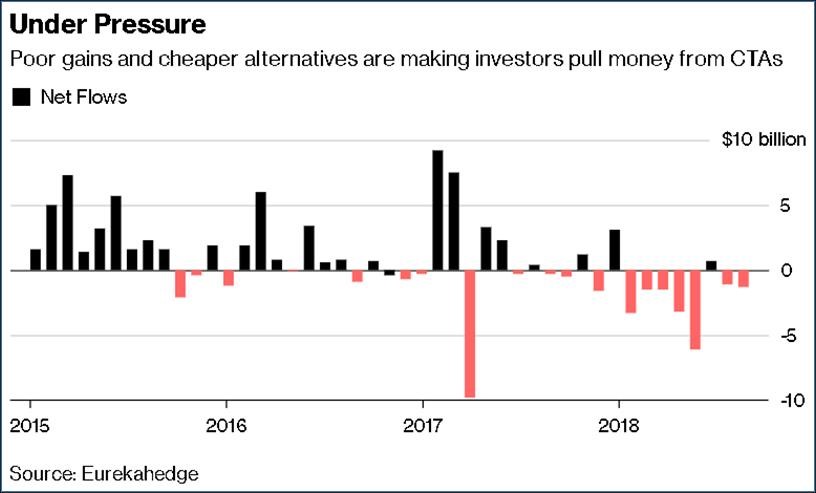 “The latest stamp of approval,” the article reports, “came from the pension funds for New York City’s police and fire departments, which in August allocated a combined $134 million to London-based Florin Court Capital that runs one of these money pools.” But some say the trend has its limits—the article quotes Nicolas Roth, head of alternative assets at Geneva-based firm Reyl &Cie, who said, “Growth of such strategies should be naturally limited by the liquidity and tradability of the underlying alternative markets and the first mover is likely to take all.”

Roth concludes, “Some of the funds launching into this space are probably surfing the marketing gimmick,” and he warns investors to be “wary of the package and look into the engine.”