An article in The Economist  discusses the importance of asset allocation for every investor, citing the benefits of keeping it simple: “There is a better chance of sticking to a simple, fixed-weights rule than a complex one.”

The article emphasizes that weighting is not the most important aspect of asset allocation. “What matters,” it argues, “is sticking to whatever weights are chosen. And that requires regularly rebalancing your portfolio.”

Highlighting how rebalancing runs counter to the hedge-fund trader philosophy of cutting losses by selling losers and keeping winning stocks, the article points out that “recent winners are cut in favor of more exposure to recent losers.” Citing an example provided by BlackRock’s Andrew Ang based on data from 1926 to 1940, the article illustrates how rebalancing reduces exposure to more expensive equities and increases exposure when prices fall: 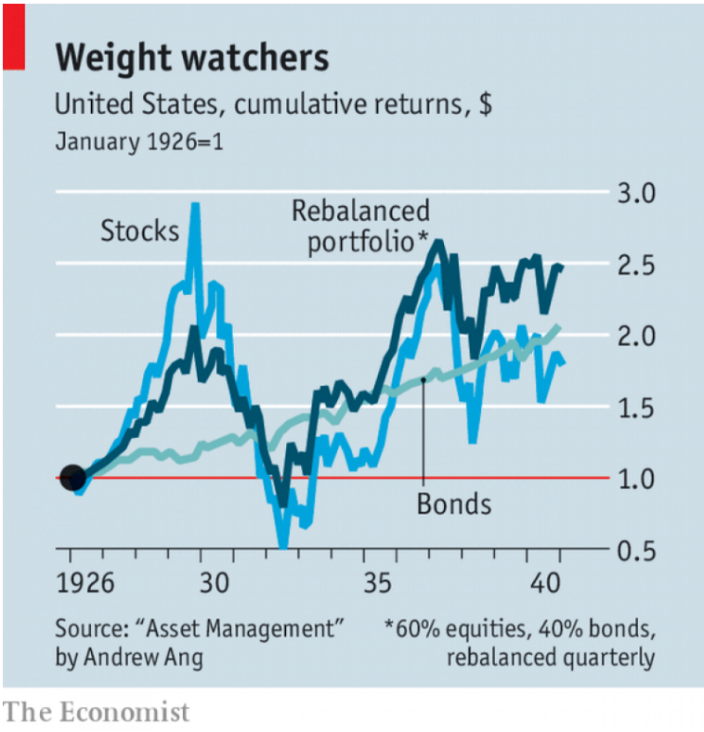 Rebalancing is effective, the article argues, because it “works against the boom-bust cycle.” Different weightings will result in different returns, but that’s not really the point. What’s important is sticking to your plan, it says, which is easiest done by keeping things simple. Ang compares the discipline of rebalancing to physical exercise: “It doesn’t really matter whether you are swimming, playing tennis or running,” he says. “What’s really important is getting into the habit of making a regular time to exercise.”

The article concludes, “If a rebalancing habit is established in calm markets, it will be much easier to follow when markets become stormy.”