Former Morningstar analyst John Coumarianos says, “my research shows that some funds with the best records over the past 15 years moved to different parts of the style box.” Writing in the Wall Street Journal, he notes that style boxes “offer a snapshot of a stock fund’s strategy” and are “the foundation of the world’s largest fund appraiser, Morningstar.” Describing a style box as a “tic-tac-toe-like grid” that “features a dot, representing most of the fund’s holdings,” he explains that “the dot’s position on the grid tells you the degree to which the fund invests in large- or small-cap stocks, and how much it pursues value or growth stocks.” Coumarianos observes that “style boxes are so widely consulted, many fund managers strive to make sure their dot doesn’t move from its current location on the grid” and therefore “see their mission as providing good ‘relative’ returns compared with a narrower peer group and section of the market – while staying where they are in the box.”

Coumarianos then tested whether style drift (moving around the grid) “could at times be a virtue instead of a sin” by ranking 106 similar funds according to their Sortino ratio over a 15-year period, which reflects return in relation to volatility. In the Journal article, he profiles the highest ranked fund – FPA Crescent, which had a Sortino ratio more than double the average (1.15 versus average of 0.5). He notes that FPA Crescent “has one of the most extreme ‘style trails’ over time” in that “its portfolio moved radically from small-cap stocks to large-cap stocks” and “from blend to value to growth.” The logic of some of this movement is apparent, Coumarinos suggests, upon comparing the Russell Top 200 (large-cap stocks) and the Russell 2000 Index (small-cap stocks) – the large-cap index “radically underperformed” the small-cap index from 2001-10, then outperformed during 2011-15. Partially due to its willingness to move around the style box, FPA Crescent “produced a 10.3% annualized return versus a 5.8% annualized return for the combined Russell Top 200 and Russell 2000 indexes.” 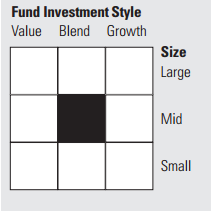