Scoring a winning stock such as Amazon is exceedingly hard to do, writes Jason Zweig in a recent Wall Street Journal article. While it might not be useless to try, Zweig argues, “many investors are going about it the wrong way.”

Zweig explains that, from 1926 through 2015, Amazon was one of the mere 30 stocks (out of 25,782 publicly traded companies) that accounted for one-third of the cumulative wealth created by the U.S. stock market. He cites data provided by finance professor Hendrik Bessembinder (of Arizona State University) showing that only 0.33% of all companies in the U.S. stock market during that period accounted for half of the wealth generated. The data also shows that all stock market gains during the 90-year period were created by under 4% of the stocks.

To reap the benefits of Amazon, the article argues, “required enormous patience and the willingness to withstand vast interim losses along the way.” In fact,” Zweig adds, “the only thing harder than finding a superstock might be holding onto it long enough for it to become super.”

He explains, however, that “the tiniest gamble” could pay off if an investor can take some short-term discomfort. One approach, he suggests, is to invest most of your money into a fund that “holds essentially every publicly traded company, then you can afford to take a big risk with the small amount of money left over.” 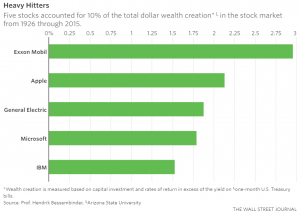