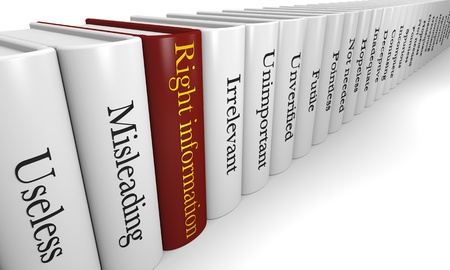 One of the interesting things about investing is that the approaches that work the best in raising capital and obtaining clients are often the worst approaches in terms of producing the best long-term outcomes. Things like chasing strong recent performance, owning the stocks everyone wants to own, and the belief that successful investing needs to be complex all look great on paper, but none of them typically lead to optimal long-term performance.

So I thought it would be fun to take a look at some possible investing marketing messages that would never work, but that have the potential to actually lead to superior long-term performance for investors

1. Invest With Us – Our Recent Performance is Terrible

Fees are a huge focus of the financial press these days, and rightly so, but behavioral biases play a much larger role in reducing investor returns over time. While the difference in fees between the average active and passive fund is somewhere around 60 bps, the decrease in returns due to the behavior gap (investors doing the wrong thing at the wrong time) has been estimated at 120 bps, and for more volatile funds, it is certainly larger than that.

This creates a dilemma for investment managers when managing client behavior. When returns are great, investors flock to invest, and when they are bad, they pull their money in droves. And doing that only hurts them. So you will often see ads for managers and mutual funds that tout their recent performance because it produces the best results.

On the other hand, an investment manager who marketed to potential clients with the heading above would likely get zero response. But in reality, by encouraging investors to put money into strategies with a good long-term record when the strategy was out of favor, they would actually be encouraging the type of behavior that produces the best returns.

Jim O’Shaughnessy, who is a pioneer in factor based investing, talks about this a lot. Both individual and professional managers tend to use a three year (or less) time frames to select strategies, but three year returns are actually one of the worst periods you can possibly use, because that is about the length of time that strategies go out of favor for, on average, before they turn around. Here is how O’Shaughnessy explains it on his blog when discussing the second point of failure active investors face.

The second point of failure occurs even if the investor has earned positive returns in the active strategy—let’s say a gain of 10% per year over the last three years versus a benchmark return of 12%. While all investors face the same point of failure when selling during market swoons, only active investors face the second pitfall. What’s more, research has shown that managers who are fired due to a three-year underperformance typically go on to outperform the manager with which the investor replaces them.

This is the exact phenomenon that is occurring today with value investing. The period since mid-2014 has been particularly bad for value strategies, so most value investors are showing poor three year returns relative to the S&P 500.

The chart below shows the focused value portfolios we run on Validea. While all different in their exact make-up, these strategies tend to select stocks that trade at a relative discount based on earnings, book value, sales, and other value metrics. Two things should jump right out. The first is that as a group, these concentrated value strategies have had a very tough period over the last 3.5+ years. None of them have outperformed the S&P 500, and as a group, they’ve underperformed by almost 35%.

And it gets even worse for the deepest of the value models. To illustrate this, take a look at the factor based model portfolio we run based on Benjamin Graham’s Enterprising Investor strategy. This is a very focused strategy with only 10 stocks so it tends to be volatile, but it is a good proxy for deep value strategies given its very stringent value criteria. Since inception, the strategy has outperformed the S&P 500, but as you can see from the chart, the recent few years have substantially reduced that outperformance.

Looking at the detail, you can see that the portfolio has been down 10% plus in 3 of the last 4 years and that is after a large rebound in the past month.

But history shows that those extended periods of underperformance are actually the best time to buy. So instead of chasing FAANG stocks, investors should likely be considering allocating stock market capital to beaten down value approaches with good long-term records. But almost no one does that. So despite the fact that marketing a strategy based on how bad it has been recently may lead to optimal investor behavior, I am not optimistic that approach will work any time soon.

2. We Own Everything No One Else Wants To

This slogan could apply to any manager who truly tries to capture the value premium over time. In order to do that, you need to own a basket of stocks that are not doing well and whose future prospects almost everyone thinks are looking bleak.

Wes Gray, who is doing some of the best research in the area of quantitative factor-based investing, often talks about how his Quantitative Value model essentially holds all the stocks Amazon is expected to destroy. And that is consistent with what typically happens with deep value investing. When you look at a deep value portfolio, you typically won’t see one stock you are excited about, but those are typically great stocks to invest in for long-term patient investors. Why? Because investors tend to overreact to bad news. So while it is true that the prospects may not look good for stocks in a deep value portfolio, it is also true that they likely aren’t as bad as the assumptions the market has priced in.

As an example, take a look at current top 20 scoring stocks using the Graham model. 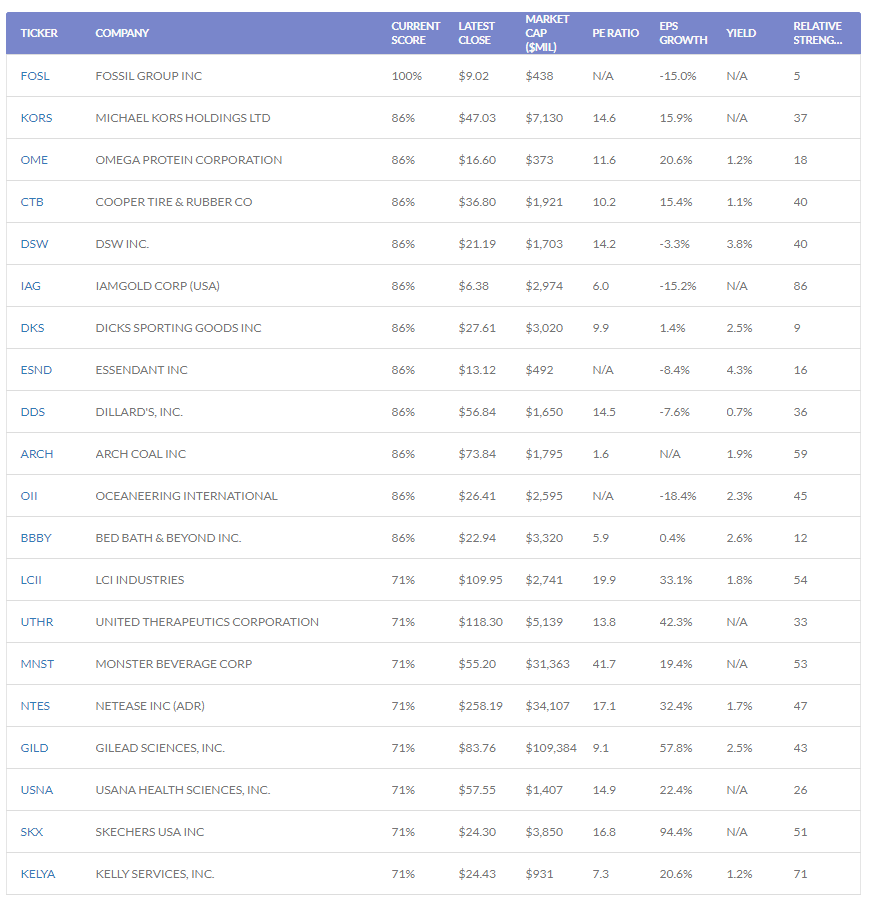 Although some of the stocks in the portfolio have bounced back recently and have good performance, are there any stocks in there whose future prospects would excite investors? I don’t think so.

Investors love to buy things that have great stories they can get excited about, but the reality is those exciting stories are typically already incorporated in the stock price. To be a value investor, you need to buy stuff everyone else hates. That isn’t something people want to do, however, so much like my first slogan, I am not holding my breath about this one working either.

3. Our Stock Picking System Is So Simple That Anyone Can Do It

Investors tend to equate the success of a stock picking system, and particularly a quantitative one, with its complexity. They want to hear that you have figured out something that no one else has and that you have built complicated algorithms with your team of PhD researchers.

But the truth is that simple is often best. If you want to build a cheap portfolio of value stocks, you can do it based on earnings or sales or enterprise value. And if you stick with it through the inevitable ups and downs, it is likely to do very well for you regardless of which metric you choose. The same is true for growth and momentum investing.

As an example, take a look at the approach we modeled after The Little Book That Beats the Market by Joel Greenblatt. It has been one of the best performing factor-based strategies we follow, and it only has the two criteria below (using Gamestop, one of the current highest scoring stocks as an example). 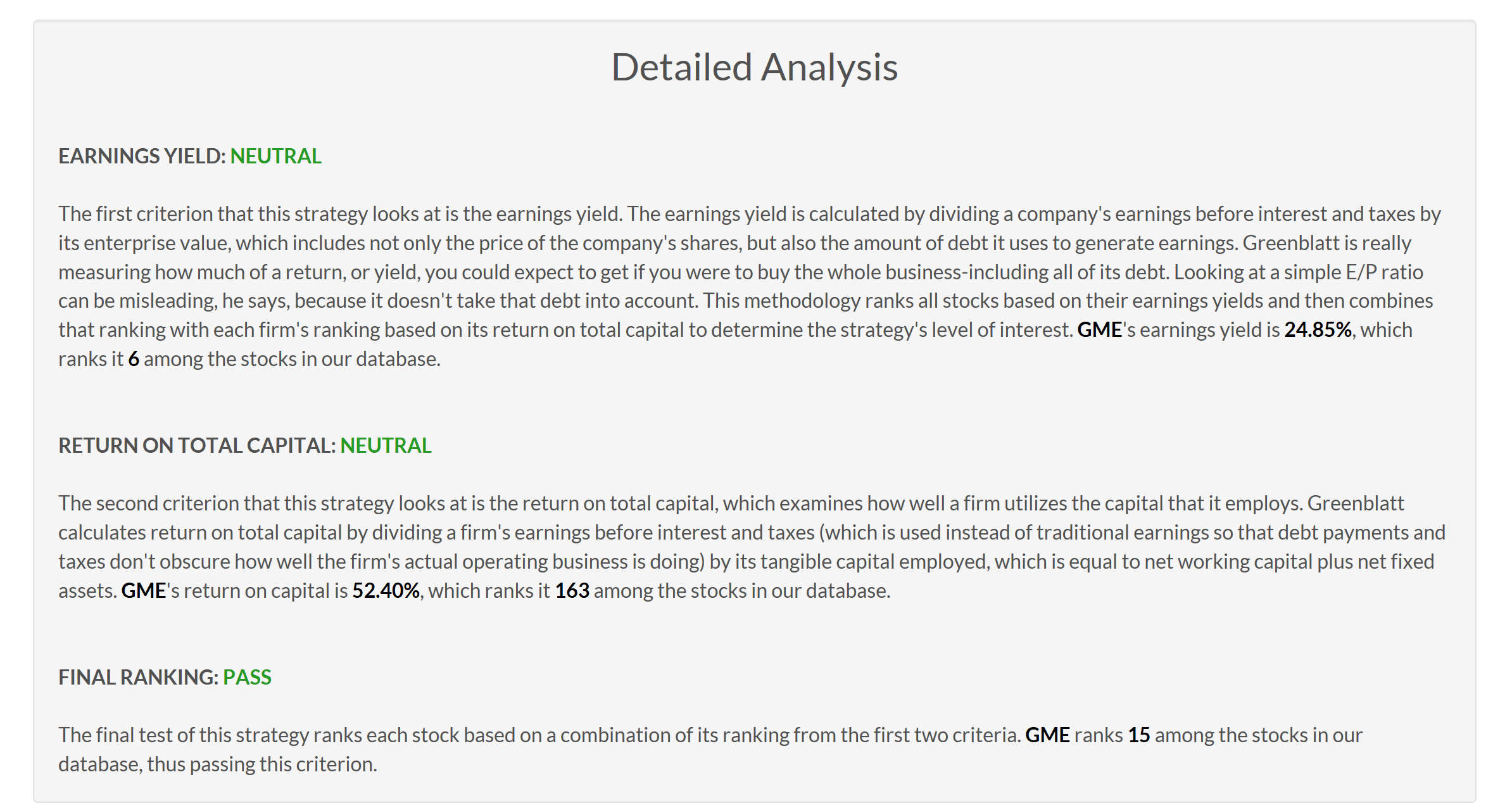 Essentially, the strategy looks at two things. First is the stock cheap based on its earnings yield (which is just the inverse of the PE ratio)? And second, what return does it earn on its capital? Using those two variables has produced significant market outperformance over time.

So although the tendency is to want to believe that it takes a complicated strategy to perform well, the opposite is true. Often the simplest models can perform the best. And they also offer an added benefit in that they can easily be understood. So when they do go out of favor, investors can be more likely to stick with them because they understand why the stocks that are in the portfolio are there.

The Future Will Likely Resemble The Past

I am not optimistic that any of these investing slogans will work any time soon. They haven’t historically and likely won’t in the future. But I have always found it interesting that what works in investing and what attracts clients to a money manager or strategy are often the exact opposite. Hopefully as things like evidence based investing become more prominent, that will change in the future. Until then, you likely won’t see anyone marketing their simple investment strategy with terrible recent performance that owns stocks no one else wants, but if the goal is to produce the best long-term performance, those might be the exact strategies to invest in.