The post-financial crisis strategy of investing heavily in hedge funds that “offered protection should the markets plunge” has fallen out of favor, according to a recent article in The Wall Street Journal.

Data from CBOE Eurekahedge shows that investors who gravitated toward “tail-risk” funds designed to perform during sudden market declines—events referred to as “black swans”– saw performance of these funds peak in September 2011 but “would have by now lost 55% of their money.” 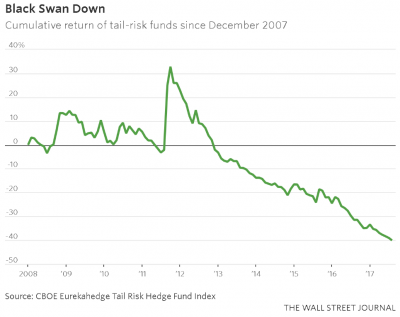 The extended bull market of the past eight years has hit tail-risk investors hard, says WSJ. These funds have lost money four of the five past years, according to data firm eVestment, and are down 6.3% this year (as of July).

But the article points out that, “Historically high stock valuations, increased consumer leverage and extraordinary central-bank stimulus are among the factors that some money managers believe make a black-swan event more likely than at any time since the financial crisis, which sent stock, credit and commodity markets plummeting.”

But will the tail-risk strategy pay off in the long run? Probably not, the article concludes: “Protection against volatility can provide returns if timed properly, but over the long term it is a losing strategy, according to a raft of academic papers and market analysis. It is similar to taking an insurance policy on your car or home. On average, it is the insured, rather than the insurer, that loses money.”