Sometimes someone says something that hits you like a ton of bricks. Well, in early January Warren Buffett was on CNBC and one of the topics he was discussing was tax reform and its impact on the value of stocks (see full video here, pick it up at the 17 min mark). In classic Buffett fashion, he makes a few very salient points that are worth digging into.

Buffett asks you to imagine you own 100% of the stock of Union Pacific Railroad, a railroad based in Omaha, NE. That would entitle you to all the after-tax earnings of the company, but the U.S. government would have owned a “Super Stock” that entitled it to 35% of the earnings before tax, because that was the corporate tax rate for many companies up until recently. Now, with the corporate tax rate of 21%, the U.S. government has given you 14% more of the company’s earnings for “absolutely nothing”.

Buffett gives another example, and it’s worth really thinking about this. Imagine you’re in business with a partner. You own 65% of the business and your partner owns 35%. One day, you walk into the office and your partner gives you 14% of the company. Your stake goes from 65% to 79% overnight and you didn’t have to put up one penny to get it. That’s a big deal. Essentially, with the lower corporate tax rate, the U.S. government has given you a big part of their super stock absolutely “free” (sort of).

The lower tax rate results in two immediate benefits. The first is that there is an bump in current and future earnings. Take Union Pacific Railroad. Not only would the increase in profits come in year 1, but also in all subsequent years as long as the lower tax rate stays in place. Since the value of stocks, like any income producing asset class, reflect future cash flows discounted back to the present, it makes a lot of sense that U.S. markets continue to exhibit strength as the full present and future benefit of lower taxes gets reflected in the future profits of companies.

But there is another positive as well, and that’s the compounding of those increased earnings over time. To see the power of this future compounding effect, take Berkshire as an example. The increase earnings can be re-invested by Buffett and his investing generals. They can buy other companies outright, purchase shares of other companies in the public markets, buy back their own stock or make other capital allocation decisions. In a nutshell, the incremental increase in earnings power has a  potential to be invested in ways that can further increase shareholder value. The effect of compounding here is a very powerful one.

That’s the really good news and the market, in part, is digesting all of that with higher stock prices. The chart below, obtained from this Bloomberg piece, shows the rapid pick up in earnings estimates. According to the article, and as you can see from the black line, “the pace of global earnings upgrades in 2018 is the fastest in at least a decade” 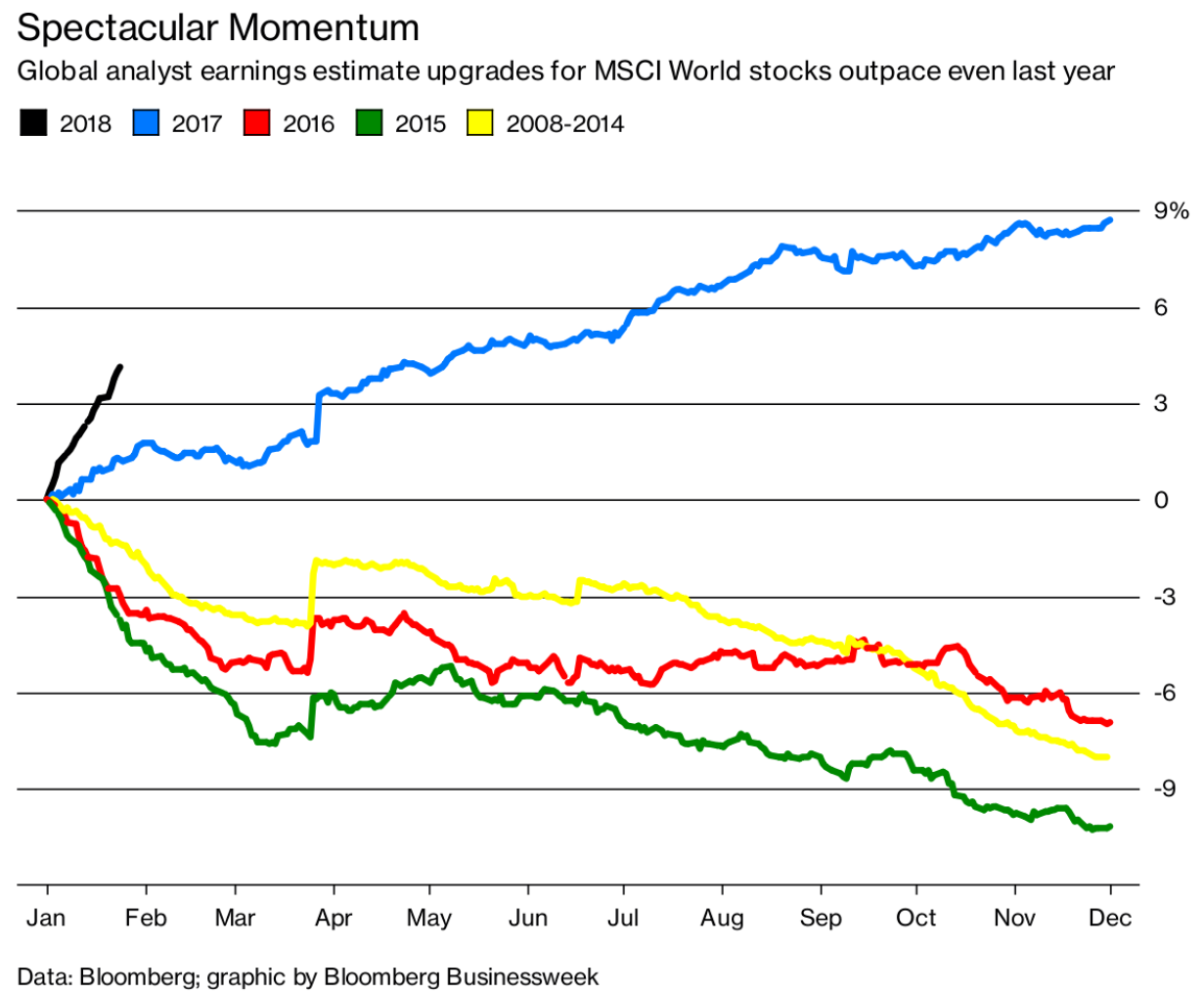 In the markets, however, its really never all one-sided. So what’s the bad news?

As Howard Marks, chairman of Oaktree Capital, pointed out in his most recent memo this might not be as “free” as you think. Citing a quote from William Dudley of the New York Federal Reserve, Marks’ expresses the potential consequences of the tax cuts. He writes, “All else equal, the tax law is likely to result over time in higher deficits, higher national debt, higher economic growth, higher inflation, higher interest rates, higher federal debt service requirements, and thus still-higher deficits and debt. These things tend to go together, and together they constitute the fiscal path Dudley describes as unsustainable. The outlook was troubling before; the tax cuts will make it worse.”

Over time the market will have to balance these two things – the increase in corporate profits with the consequences that come with high deficits and a path that might not be sustainable. Right now, equity investors are feeling grateful that the U.S. government has just given them part of their “Super Stock”, but remember there are really no free lunches in the long run.