We run over 40 quantitative models at Validea. They run the gamut of investing styles. Any time we can find a model from a respected source that uses factors and shows long-term outperformance, we will track it and add it to our arsenal. Our models range from deep value to growth to momentum. As we have studied these models over the years, one commonality has become very clear. And it applies to all investment models, not just the ones we run. That commonality is that no investment model outperformance the market every year.

Looking at our data from 2006 to 2017, we have one investment model out of 43 that has outperformed in 9 out of 11 calendar years, which an impressive 83% rate, and another that had seven consecutive years of outperformance. And truthfully, there is no way we would have been able to predict which of these quantitative strategies would have been most consistent in advance. All of the other models we track show less calendar year consistency than those two. The pain of inconsistent performance is the price you have to pay for long-term outperformance.

Mutual funds are no different. Even the best mutual funds will go through extended periods where they trail their benchmark.

There is one exception, though, in a fund manager who produced an amazing track record of beating the market for 15 consecutive years. Bill Miller, who managed the Legg Mason Capital Management Value Trust, generated 15 consecutive years of market outperformance from 1991 to 2006 before things unraveled during the financial crisis and thereafter. The chances of beating the market fifteen years in a row, assuming 30% of funds beat the market in any given year, is 1 in 69 million as you can see from the chart below.

Starting in 2006, though, something really bad happened to Miller’s approach to investing. As Nir Kaissar recently wrote in Bloomberg, the Legg Mason Value Trust pretty much bit the dust. From January of 2006 through the end of Miller’s tenure in 2012, the fund lost 5.1% annually compared to a 4% positive return for the S&P 500. That’s 9 percentage points difference annually.

This article is not meant to pick on Bill Miller, who has come back with excellent performance again since then, and who we emulate with one of our quantitative models, but rather to provide some lessons for investors on the realities of investing over time.

Miller’s outperformance streak was unique in that he generated the outperformance in two very different market environments. From the mid-90s to early 2000, he did it in what was mostly a large cap, technology led market. Many value strategies trailed the overall market during this time. Starting around 2000, there was a move toward value and low-priced stocks and he continued his strong run. Typically, you see value managers doing well in strong periods for value, and vice versa for growth, so the fact that Miller was able to do it in both types of market environments is unique.

To illustrate this point, let’s look at the data from the S&P SPIVA Persistence Scorecard.  The table uses data from September 2014 to September 2016. In Sept. of 2014, there were 631 top quartile equity funds according to S&P. Fast forward two years to Sept. 2016, and only 2.85% (or 18 funds) stayed in the top quartile. And this is only over a two-year period. If you extend the figures out a few years, the percentages would fall.

Bill Miller, at the peak of his outperformance streak in late 2005 and early 2006, was heralded as one of the greatest investors of all time. At the time, the Legg Mason Value Trust had over $20 billion in assets as investors piled into the fund as a result of the good, consistent market outperformance. While you can’t blame investors for being attracted to the returns, a lot changes for a manager when you go from a few billion dollars in assets to $10 or $20 billion. In 1998, Morningstar awarded Miller the Domestic Stock manager of the year, if you look at the chart below, that is when assets really started to balloon in the fund.  As assets grow for a money manager, the universe they can invest in shrinks, which makes their job much harder. Without doing a deeper dive on Miller’s holdings during his early days and during the peak years, it is difficult to say how much of a problem this was, but clearly more assets came in at or near the tail end of the performance streak vs. the outset. 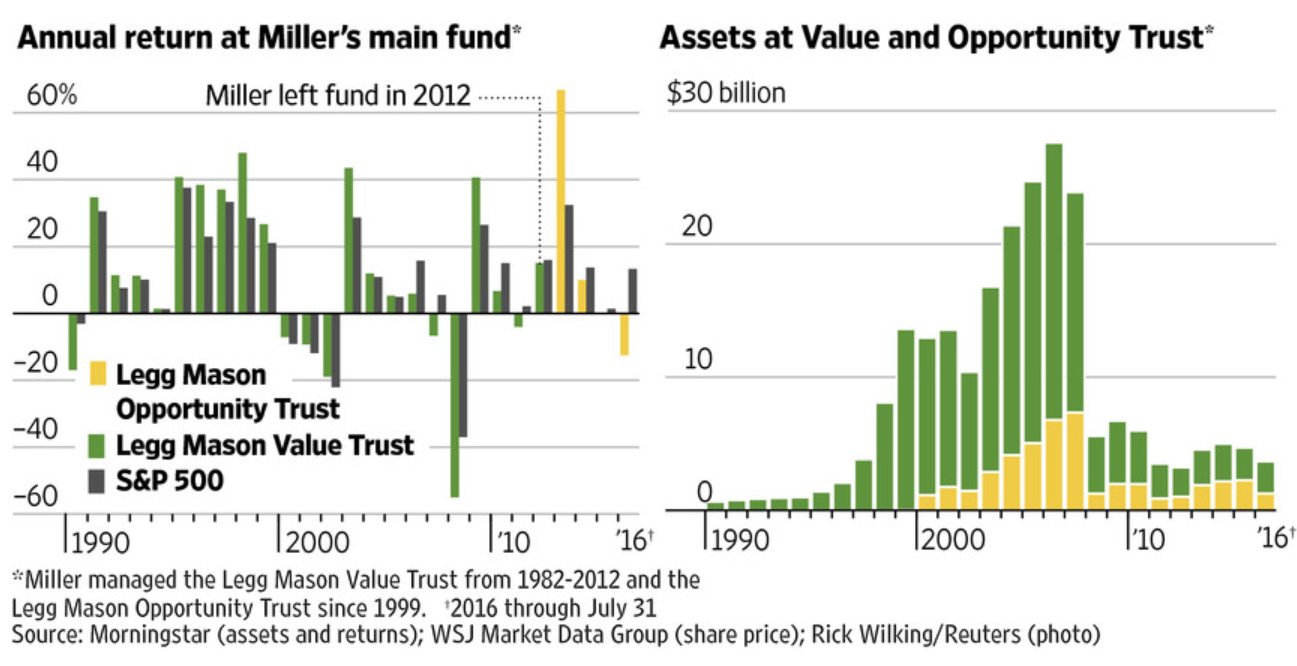 3 – Most Investors Don’t Get the Performance They See

As investors, we tend to look at track records and make decisions based on that performance. In the case of Miller, his fund produced an annualized return of 16.4% a year during his streak according to this Fortune article. However, investors in the fund, as a collective group, achieved a return of 11.3% during that period. How is it that the fund returned 16.4% while investors only got 11.3%?

Because investors piled into the fund after periods of very strong returns, they didn’t get the benefit of capturing the full return from the beginning of the streak. Furthermore, there are investors who bought in toward the peak and then sold toward the bottom. As a result, the average investor during the streak didn’t come close to capturing the alpha generated by the fund over time. This is true of pretty much all active funds, and many passive funds as well.

4 – Investors Get Too Caught Up in Calendar Year Returns

When you are looking at calendar year returns, you are only looking at returns in between two set dates in each year (i.e. Jan. 1st and Dec. 31st). While useful, it may be better to look at an investment strategy’s rolling returns. Rolling returns effectively allow you to see how an investment strategy has performed over various periods of time. For every calendar year, there are actually around 240 annual periods you can calculate. The same is true for longer periods like three and five-year returns. Rolling returns tell you, with much more robustness, the consistency of outperformance. Just because you see a strategy that has delivered consistent calendar year performance, you shouldn’t think the portfolio has always outperformed. Miller, in all likelihood, had many rolling twelve-month periods he did not outperform during the streak. He just happened to outperform for the calendar year periods.

There are probably many other lessons you can draw from Miller’s performance streak, subsequent decline, and re-emergence. To Miller’s credit, he could have just retired after the financial crisis. However, he split with Legg Mason and now runs the funds through Miller Value Partners that have done very well. Miller recently said, “I would just call it the next stage as opposed to a second act.” And that might be the biggest lesson of them all — the market will knock down even the best investors but those that get back up will be the ones who succeed in the long run.