The best scenario for investors is steady and low levels of inflation that ward off deflation but also discourage central banks from hiking rates too rapidly, says a Wall Street Journal article from last month.

So far, the article asserts, “Trumpflation” has been embraced by deflation-fearing investors—but shareholders should be “keeping a watchful eye on consumer prices, as they often rise much faster than anticipated.”

Richard Turnill, chief investment strategist at BlackRock Investment Institute, argues that although higher inflation supports corporate earnings (since increased wages are then spent by consumers), it can push down share valuations.

Jason Trennert, chief investment strategist at Strategas Research Partners, says, “If inflation gets to 4%, the Fed’s really behind the curve,” but adds, “The good news is that we probably have some time before we get to 4%.” [The article notes that consumer-price inflation in the U.S. is currently just above 2%. New figures will be released on February 15th.]

If inflation picks up speed, says the article, “history suggests that the price/earnings ratio will suffer, as the sweet spot for valuations has been with inflation in the range of 1% to 3%, and they have on average fallen sharply with inflation above 4%.” Such a drop in valuation, it argues, “will more than offset the rise in earnings from a stronger economy.” 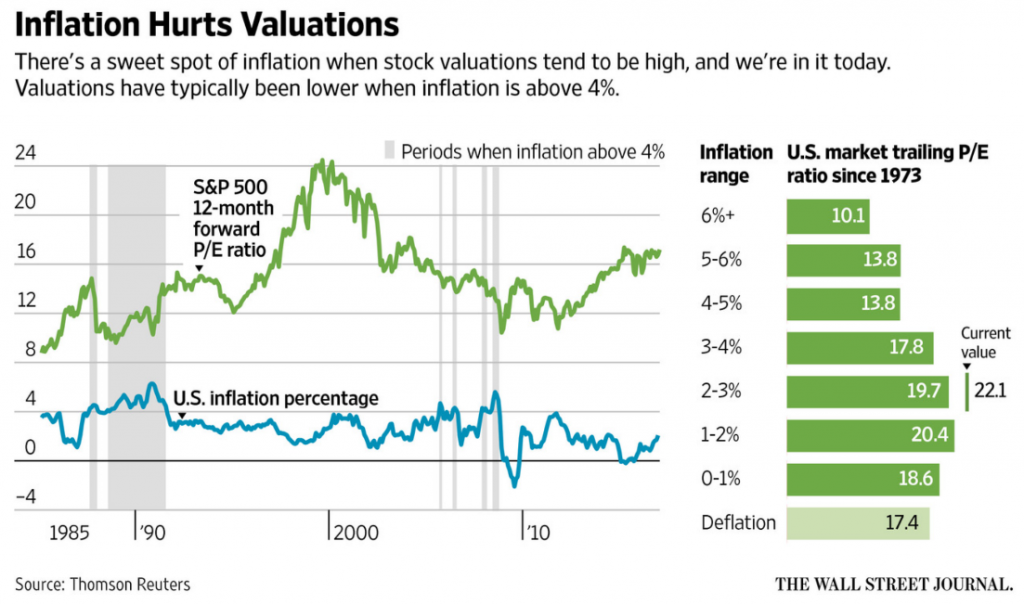