Maybe, but it seems the jury is still out.

Data compiled by Bloomberg shows that value ETFs have taken in $5.5 billion in 2016, while growth ETFs have seen withdrawals to the tune of $6.2 billion. This could be a function of increased investor optimism, says Dan Miller of Boston-based GW&K Investment Management. “Value has done so poorly for so long and it’s under-owned among investors. All we need is for investor interest to pick up a little and that could be enough to sustain the improvement.”

One source of fuel for a value comeback could be the finance sector, where valuations hit a 14-year low this year relative to the rest of the market. Financials remain 37% below the record highs they reached 9 years ago (the most of any S&P 500 industry), and the potential for a Fed rate hike is giving bank stocks a boost. However, according to Ed Clissold, chief U.S. strategist at Ned Davis Research, the group has to prove that its increased strength isn’t just a flash in the pan. He says, “The catalyst is going to be better economic growth and the visibility on financials. Once those things are in place, then you could talk about probably a once-a-decade type of rotation.”

David Chalupnik, head of equities at Nuveen Asset Management, believes it’s too early to declare a value lead much less a victory. He says, “In all previous cycles where value outperformed, better returns started with an economic acceleration. That’s not happening now.” According to Chalupnik, “Money will go to the Facebooks, the Amazons, the Googles, because no matter what happens to the economy, they’re going to continue to grow at a rapid pace.”

The graphic below is from Bloomberg. 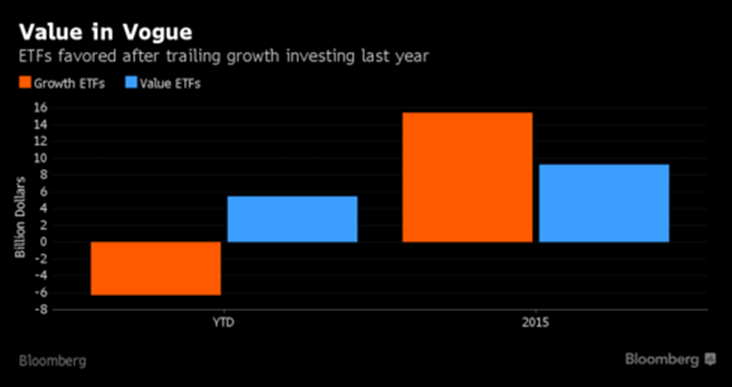