Can President-elect Trump deliver on fiscal stimulus and job growth after taking office next month in the face of a fractious American Congress? The question, posed in last week’s Bloomberg, is addressed by Mohammed El-Erian, Bloomberg columnist and chief economic advisor at Allianz SE, who says reducing risk by increasing cash holdings might be a good idea.

Trump’s promises for tax cuts and spending increases are bolstering growth forecasts, but El-Erian believes that the currently robust market has “priced in no policy mistakes. We’ve priced in no market accidents, and we’ve ignored all sorts of political issues.” Mark Kiesel, chief investment officer of Allianz-owned Pimco, says his firm has been “de-risking,” adding, “We actually like holding, in the credit markets, a little more cash.”

Bloomberg data shows that the Dow Jones Industrial Average has returned 18 percent (included reinvested dividends) in this year’s rally. The result, the article says, “is a decline in the index dividend yield to 2.39 percent, below the Treasury 10-year yield at around 2.57 percent.”

Analysts at Goldman Sachs Group Inc. are jumping on the caution bandwagon. According to their rationale, the article explains, “Any large fiscal stimulus risks stoking inflation more than growth, and in turn boosting interest rates that then hurt shares.” The move, they wrote in a recent report, would pose a risk to the “equity market party.” 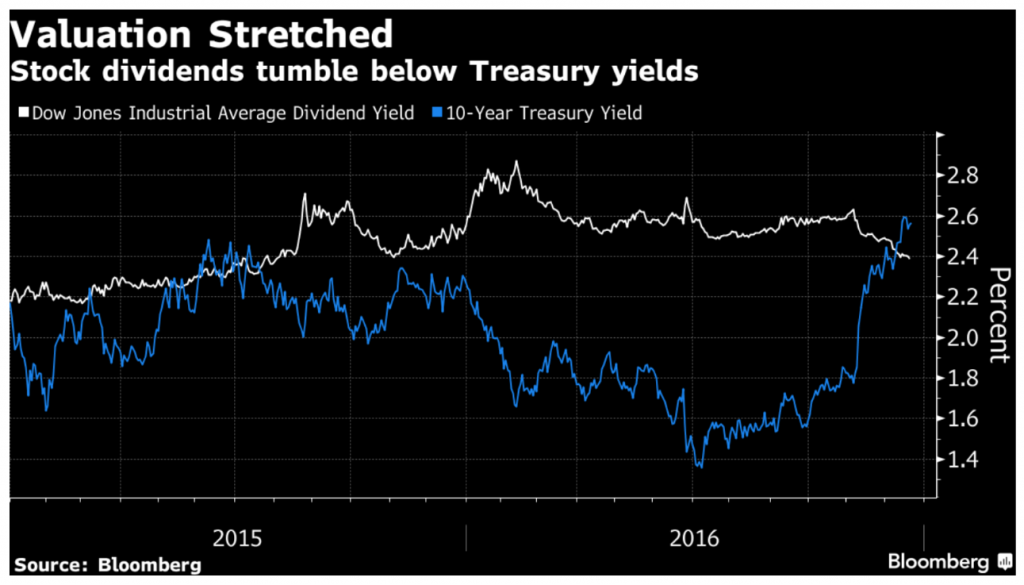