Since its 1990’s beginnings as an online bookseller, Amazon has grown into a behemoth that has “irreversibly changed the way consumers shop for everyday goods and read and watch media and entertainment,” writes Validea CEO John Reese in a recent article for Nasdaq. But scoring a hidden gem like Amazon early on, says Reese, is no easy task.

“More often than not,” he writes, “investors who carefully select stocks of strong companies and diversify their portfolios across a wide range of securities are going to make money, but not make it rich on those investments alone.” According to research conducted by Arizona State finance professor Hendrick Bessembinder, says Reese, more than half of stocks since 1926 have failed to outperform one-month Treasury bills.

Reese advises that, while there will always be a temptation to search for the next Amazon or Apple, “I believe that if you’re going to try and pick stocks, you should do it based on the fundamentals and valuations.” Using stock screening models he created based on the philosophies of such legendary investors as Warren Buffett and Peter Lynch, Reese provides a list of companies that currently pass at least four of the screens with a score of at least 80%. 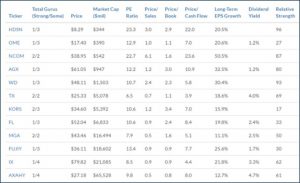