A comprehensive  white paper published by GMO’s Matt Kadnar and James Montier in August—arguing against a predominantly index-focused investment strategy–was condensed in a recent MarketWatch article.

The article quotes the authors: “A decision to allocate to a passive S&P 500 index is to say that you are ignoring what we believe is the most important determinant of long-term returns: valuation. At this point, you are no longer entitled to refer to yourself as an investor. You may call yourself a speculator, but not an investor.” 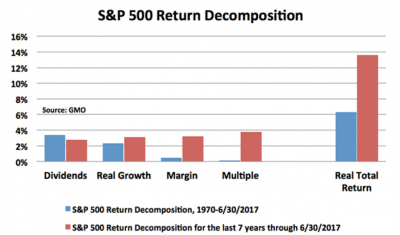 Given the market’s stretched valuations, the paper explains, passive investing prevents an investor from underweighting the most overpriced shares, which can be costly. It argues that for the recent, healthy gains to endure, “profit margins and P/E multiples must continue to expand. That’s unlikely since both of these components are near all-time highs.”

The chart illustrates that, since 1970, dividends, earnings growth, profit margins and P/E multiple changes have contributed significantly lower percentages compared to the last seven years. The article points out: “Even assuming the current P/E ratio and profit margins are normal doesn’t allow for the computation of continued robust returns since P/E and margin expansion account for such a large part of recent gains.”

The upshot of the GMO paper, the article says, is that investors should limit their exposure to U.S. stocks.