Writing for Bloomberg View, Stony Brook professor Noah Smith asks, “As passive [investing] takes over more and more of the asset-management universe, will the market become more efficient or less?” To get there, he begins by noting the “stunning” and ongoing “shift from active to passive investment management” may be “the biggest story in the finance industry during the past decade.” The graph below illustrates the change. He suggests that the development may result in part from “the power of the idea itself,” which connects with the efficient markets hypothesis for which Eugene Fama won a Nobel Prize in 2013, because “financial markets do a decent, if not always perfect, job of scoping up available information . . . and incorporating [it] into the price.” Thus, “people who try to beat the market are likely to lose [because] they tend to be trading on stale information.” Fees associated with active management become particularly unattractive in this light, especially when (as now) returns tend to be rather low. Passive investing has limits, however, such as the absence of an “index that represents a value-weighted combination of all assets in all countries,” which essentially forces investors to make quasi-active choices by deciding what asset classes and markets they want to invest in. “So active isn’t dead, but it’s shrinking,” Smith says. The effect of this trend on market efficiency is not entirely clear, but Smith points to work by Sanford Grossman and Joseph Stiglitz that highlights the role of transaction costs, concluding that if markets were perfectly efficient “there would be no compensation for gathering information, so no one would do it, with the result that markets would come totally unmoored from reality.” Further, in an ideal context, “the inefficiencies in the market . . . will be exactly big enough to compensate active investors for the cost of gathering and interpreting information about fundamental value.” This leads to Smith’s answer about the result of growing passive investment: “eventually, we’ll reach a point where active management, even after fees, does as well as passive” and “the best active managers will become proprietary traders, shunning outside money and making their services unavailable to the investing public.” Smith sees this as an “ideal endgame,” but one “we might actually overshoot” before settling on it: “active management might one day make a comeback, but not until well after the comeback is needed.” 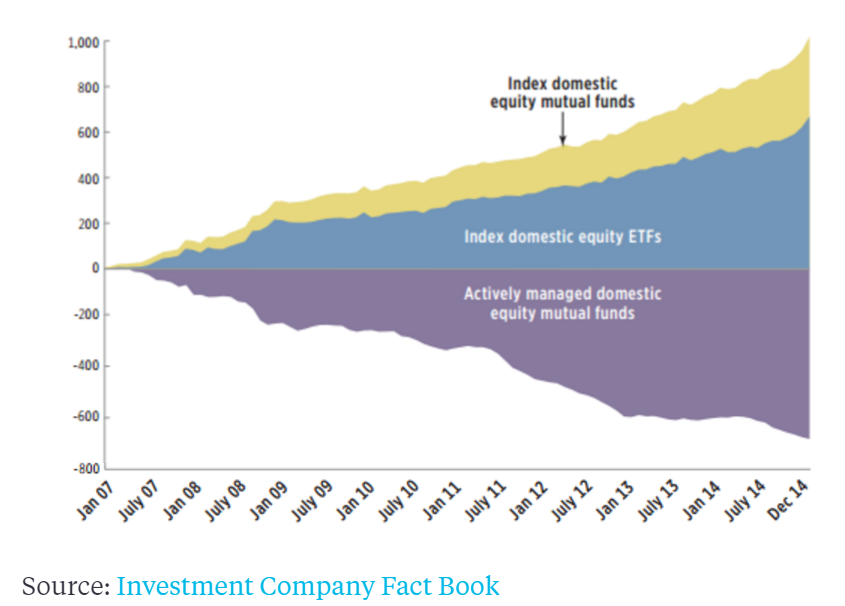