Mark Hulbert writes in MarketWatch that “the U.S. stock market over the next six months is more likely to be notably higher than it is to drop further.” He bases this prediction on a review of historical data since the Dow Jones Industrial Average was created in the 19th century: “a likely rally is what emerged when I studied all occasions over the last 120 years in which the stock market tumbled as precipitously as it has since late December,” he says. As represented in the chart below, Hulbert notes that “subsequent returns following losses this big and fast were, on balance, better than the average of all days over the last 120 years.” Of course, the rebound has not always occurred, but Hulbert says it happens “more often than not.” For example, the last time “in which the market fell at least 11% in 29 trading sessions was in the summer of 2011” and over the next “three months the Dow rose more than 8%, and in six months’ time was almost 20% higher.”

He suggests that drops this big and fast “are rare enough and painful enough to lead many, if not most, shorter-term investors to throw in the towel,” which “sets up the sentiment preconditions for a powerful rally – even if the big drop occurs within a longer-term secular bear market.” Characterizing bear markets as more “death by a thousand cuts than a fatal stabbing,” Hulbert describes the recent drop as “anything but” a major bottom. Overall, he says, the market’s recent decline doesn’t seem like the beginning of a major bear market.” 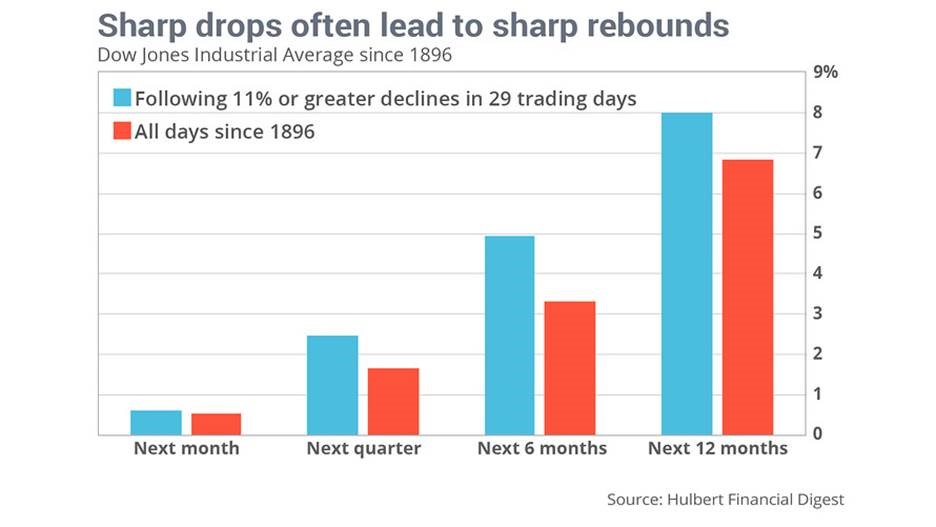