A new study conducted by Harvard University professors reveals that a share price run-up is not necessarily a precursor to a market bubble, writes Mark Hulbert in a recent Barron’s article.

The study also suggests, says Hulbert, that the “mere existence of a major decline doesn’t automatically mean that the previous run-up was a bubble.” [The study defines a bubble as a price increase of at least 100% over a two-year period followed within the subsequent two years by a drop of at least 40%.]

When this definition is applied to a small sample, the research reflects that “very few episodes in U.S. history qualify as a bubble. Not even the housing boom, which ended so ignominiously in 2008, qualifies.” So, the researchers applied their definition to various industries, going back to 1928.

The study zeroed in on the probability of a crash occurring after a price run-up of at last 100%. The findings: “A collapse of more than 40% over the subsequent two years occurred 53% of the time—or 21 times.” In nearly half the cases after big price increases, prices continue rising, the study showed. The researchers found that indicators such as volatility, spikes in the percentage of firms that issued equity over the trailing year, above-average PE ratios and disproportionate price rises among newer firms were more likely to trigger crashes.

So, how do current market conditions stack up? Hulbert writes that one researcher argued that many of the aforementioned indicators are “not flashing warnings right now. Market volatility in recent months has been decreasing, for example, not increasing. And the percentage of firms issuing equity is below the historical average.” 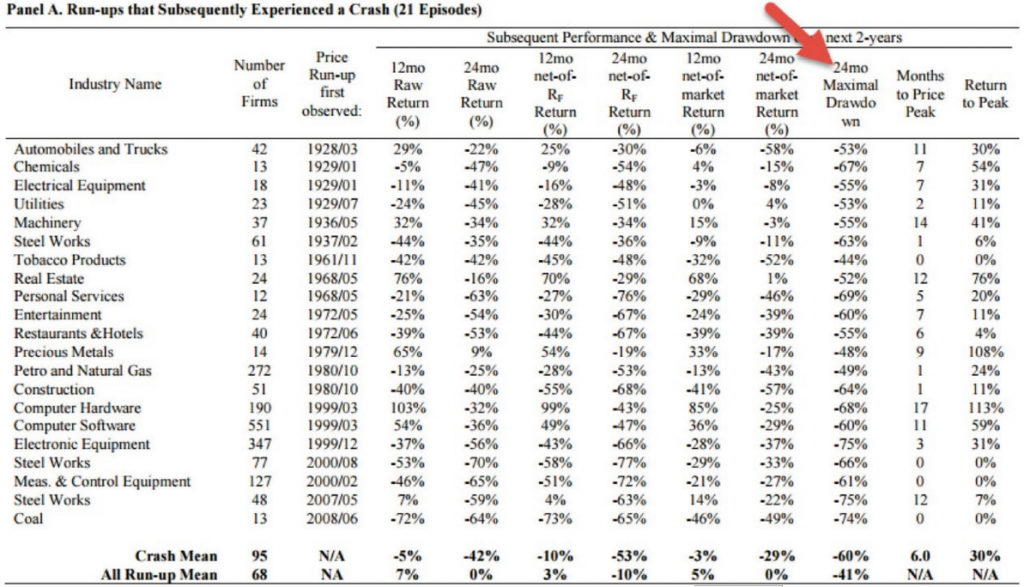