While the stock market doesn’t like war, the uncertainty that precedes a foreign military operation is typically resolved soon after any U.S.-led hostilities begin, and the market responds very positively. This according to Mark Hulbert in a recent Barron’s article.

Hulbert cites the countries “saber-rattling directed at North Korea and Syria” as recent examples corresponding to a dip in the Dow Jones Industrial Average (Validea note: this as of April 20th—the index has since picked up slightly). “This period of market uncertainty,” writes Hulbert,” is likely to continue so long as uncertainty remains elevated.” 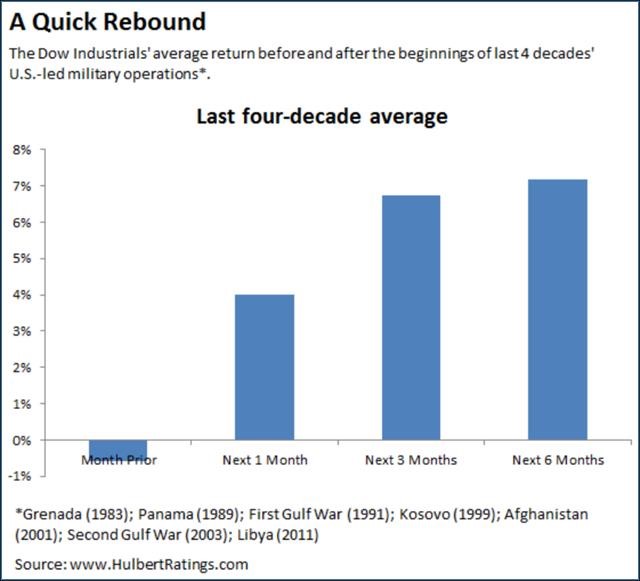 Note: Hulbert explains that the above-cited military engagements had a “well-defined beginning date” while, for example, our war on-terrorism has not. In this case, given what he refers to as protracted operation largely conducted in “secret,” his findings would not apply.

Hulbert attributes the rallies to a “marked reduction in market volatility, which is one measure of risk,” and notes our country’s tendency to “become more cohesive during periods of hostility.” As far as sector performance, however, he writes, “We aren’t aware of any particular sector bets the might make sense” in an effort to exploit this pattern.

Any market weakness corresponding to uncertainty, says Hulbert, can continue as long as the uncertainty persists. However, he argues, “a shrewd contrarian bet would be for a sharp rally if and when U.S.-led hostilities commence.”