Many smart-beta funds– which develop portfolios focusing on various factors such as low volatility, value, or momentum– have underperformed the market, especially after accounting for fees and expenses. This according to a recent MarketWatch article which concludes, “Tally another point in the pro-indexing column.” 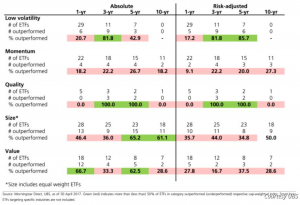 While the article points out that the rate of outperformance depends on the time frame analyzed, it says that “broadly, only 30% to 40% of smart beta exchange-traded funds beat their benchmark on an absolute basis, while only 25% to 32% do on a risk-adjusted basis” (data provided by UBS).

According to the article, the absence of significant corrections and/or volatility in the extended U.S. bull market has impacted performance, and it argues that such an environment creates a bias toward certain factors. Ben Johnson, Morningstar’s director of global ETF research, explains, “Factors have cycles. They will experience stretches of out- and underperformance relative to other factors as well as the broader market.”

Smart-beta products remain “dwarfed” by the flow of investor dollars into passive funds, according to Morningstar.