Investors seem to be moving away from stocks and toward bonds, reversing a historic tendency to gravitate to the “hottest” asset, according to a recent article in The Wall Street Journal.

“Fund investors,” it says, “are notorious for buying whatever has recently had hot returns, often right before it goes cold.” It points out, however, that through September 29th, the iShares 20+ Year Treasury Bond ETF (which holds government debt maturing between 2036 and 2047) has had the “strongest monthly, quarterly and year-to-date influx of money in its 15-year history.” 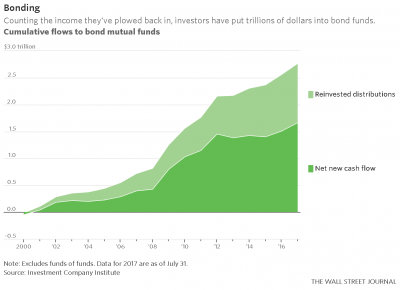 Investors are buying into bond funds, the article says, because of their stability relative to stocks rather than in anticipation of a rise in bond prices. According to Fran Kinniry of Vanguard, since U.S. stocks have more than tripled since the financial crisis, an investor who had a 60%/40% stock/bond portfolio would now have more than 75% in stocks. “Getting those ratios back into balance,” the article says, “requires buying a lot more bonds.”

Kinniry argues, “Back in the late 1990s, investors were very momentum-based, buying stocks and selling bonds. But now, here we are in the midst of this giant bull market for stocks, and I love seeing that investors are buying bonds instead.”