Major markets are moving together more than usual which, given this period of high valuations, is raising concerns that even a slight pullback could cause significant, negative repercussions, according to a Wall Street Journal article from earlier this month.

The article explains that investors have been “backing away in recent weeks from some of the year’s hottest trades” as gains in stocks, bonds, gold and low-volatility funds have started to reverse. The worry is that such a shift in sentiment could “trigger a cascade of losses.”

“The way to think about it is as a coiled spring,” said Vadim Zlotnikov, co-head of multiasset solutions for AllianceBernstein Holding LP. “Because the margin of safety is quite low, you can get these significant moves on relatively little incremental news.”

Prices of the S&P 500’s growth and value stocks, typically negatively correlated, have been trending together for the first time in at least 37 years, according to J.P. Morgan. Investors sold off growth stocks in favor of dividend payers such as utilities, which caused a dip along with value shares.

According to Zlotnikov, this type of climate can lead to “significant moves on relatively little incremental news.” Which, in turn, could lead to a situation where, the article says, “what went up together could come down together.” 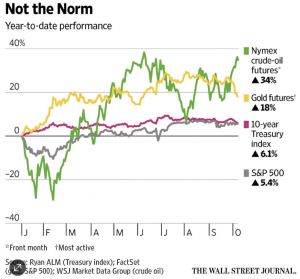 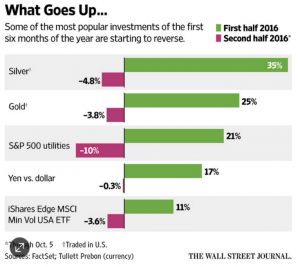