Of the Nasdaq’s run-up above 6000, 40% is attributable to only five stocks: Apple Inc., Facebook, Amazon.com Inc. and Alphabet (parent of Microsoft and Google)— which comprise only 10.3% of the index’s market capitalization (according to S&P Dow Jones Indices). This according to a recent article in The Wall Street Journal.

“A rally driven by just a few stocks,” the article says, “is typically interpreted as a sign that investors lack conviction and the rally may be on its last legs.” Researchers at the Institute of Economic Research at Hitosubashi University in Tokyo have been able to quantify the concentration of stock trading by tracking the index’s gains against the distribution of different sizes or market capitalizations among the components (a method called power law) (see chart below).

Readings above 1.0, the article explains, indicate a strong alignment among the companies while those below 1.0 indicate that “market-cap gains are going to progressively fewer companies.”

In looking at the Nasdaq Composite in particular, the researchers found that the power law index was above 1.0 from 1990 through the mid-90s, fell under one during the dot-com bubble and stayed there through the financial crisis and its aftermath. According to the research data, the article says, the measure only climbed above 1 in 2010, “when the next rally was taking off and has within the past few years fallen back under 1.”

Over the past two years, investors have piled into the biggest tech stocks, the article says, many believing that these firms have “built giant, unassailable franchises that generate large profits.” While that’s hard to debate, it adds, the problem comes when “an investment theme gets too popular.” 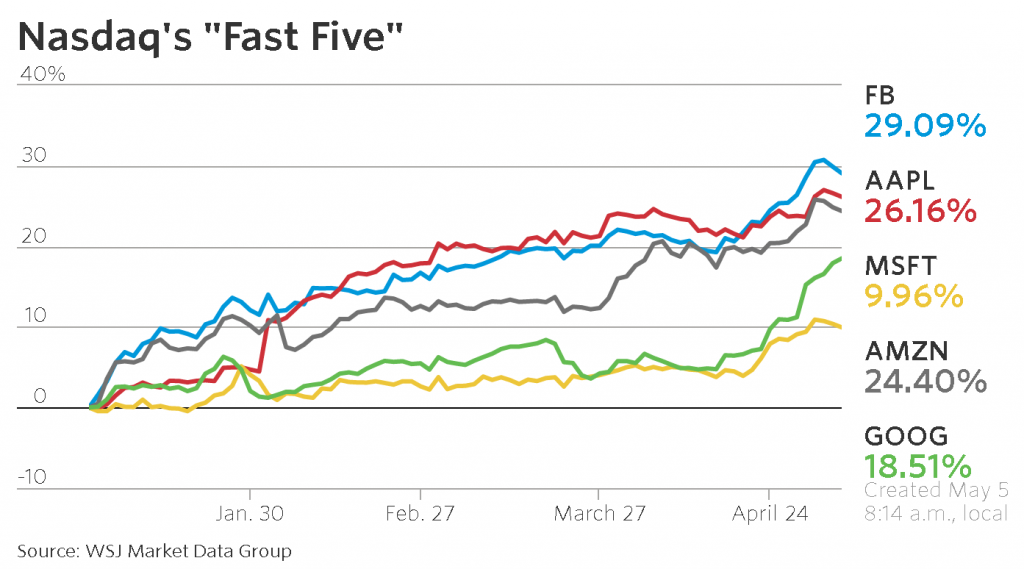