After a brief post-election surge at the end of 2016, small-caps “went nowhere” for nine months, but the asset class has “finally decided to join the party,” writes Ben Carlson of Ritholtz Wealth Management in a recent Bloomberg article. 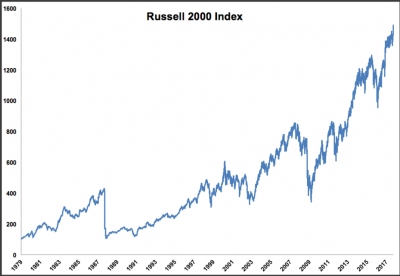 “Although 2013 was a breakout year for small-cap stocks,” writes Carlson, “there have been a steady number of all-time highs in the ensuing years.” Since small-caps can be volatile, this could be a sign that investors are pivoting to riskier stocks (historically, he points out, small-cap stocks exhibit 20 percent higher volatility than large-caps).

Carlson says that, “One of the biggest problems with smaller companies is that they tend to go out of business or become distressed much more frequently than larger companies.” That said, Carlson  cites research conducted by AQR Capital Management that illustrates how small-cap performance can “be improved if you control for quality, or remove ‘junk’ from the equation.” For investors who do so and understand the vagaries associated with the asset class, Carlson argues, “small-caps can make for a valuable portfolio diversifier.”