A new study has found that most of the market anomalies academics have identified are not statistically significant, says a recent Wall Street Journal article.

After analyzing 447 anomalies (the biggest test of its kind conducted so far), the researchers concluded that more than eight out of ten “vanish when rigorous tests are applied,” according to the article. In their report, they warn that academics may manipulate statistics to come up with compelling findings, a practice statisticians call p-hacking.

The research also confirmed, according to WSJ, that the most popular factors passed muster–value momentum, investment and quality—although to a lesser extent than previous studies show. “A lot depends on exactly how the factors are implemented,” the article says. 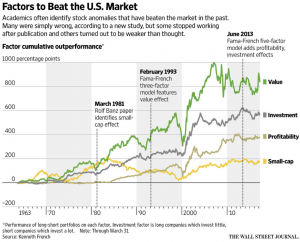 One factor that failed the researchers’ test, however, is related to operating return-on-equity—a factor that article says was “recently set out by the godfathers of quantitative finance, Nobel-winning economist Eugene Fama and his colleague Kenneth French.” AQR founder Cliff Asness (a former student of Mr. Fama) warns against overreaction to the findings, but says his approach to factors is to identify those that “carried on after being identified, can be seen in other markets or asset classes, and where minor changes to how they are defined don’t much affect the result.”