Investors pulled $2.6 billion from U.S. stock funds for the 10th week in a row, according to a recent Bloomberg article (based on data as of August 23rd outlined in a Bank of America Merrill Lynch research paper). In fact, U.S. equity funds have suffered their longest exodus in 13 years.

“The outflows are yet more evidence traders are shunning the U.S. in favor of better growth prospects and more stable politics elsewhere,” the article says. 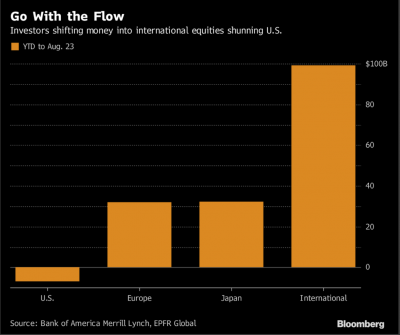 Increasing doubt around the likelihood of policy change in Washington has exacerbated the trend, the article argues, turning attention and favor toward European equities.