Small-caps have seen the biggest outflow in 10 years, according to a recent Bloomberg article.

The article says that after being “spooked by the steepest selloff in the domestically focused stocks” since the election, last week investors pulled $3.5 billion from the biggest ETF that tracks the Russell 2000 Index. It adds, “The biggest outflow in 10 years comes less than a month after small caps roared to an all-time high on speculation Trump administration policies would supercharge growth in the world’s largest economy.” 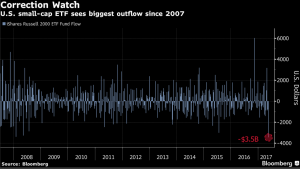 The small-cap index, the article says, is less liquid than the S&P 500 and more reactive to the performance of the dollar, “which sits at the lowest level since November compared with a basket of major peers.” Still, the article points out, small caps have gained since the pull-out. 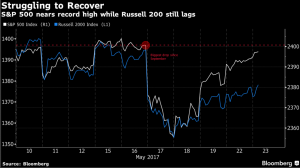 Andrew Brenner, head of international fixed income for National Alliance Capital Markets, argues that the outflow from small caps indicates that the market is headed for a correction, according to the article. “The market is getting ready to sell off,” Brenner argues, adding, “Not just yet, but it is getting near. Facebook, Amazon, Google, Microsoft, Apple, those are the ones that have bounced back strongly. It’s left the Russell in the dust.”