While stocks have far outperformed bonds over the past couple centuries, bonds have had the edge over the past 30 years. So, which is the better bet going forward? Top strategists Barry Ritholtz and Jeremy Siegel debated that recently on CNBC. Siegel, author of “Stocks for the Long Run”, remain firmly behind stocks as the better choice, noting that stocks are trading at very reasonable valuations right now — unlike other times in the past decade-plus. Siegel also said that while bonds beat stocks over the past 30 years ending December 31, 2011, their edge was minor. He also says that with bond yields so low right now, stocks are clearly the better option for long-term investors. Ritholtz says that over the next 20 years, he expects stocks will outperform bonds. But, over the next one, two, or three years, he’s not so sure. He says secular bear markets typically last 14 to 18 years, which means this secular bear could have a few more years to go. He says a mix of stocks and bonds makes more sense for investors. He also says that current P/E ratios are artificially low due to the ultra-low interest rates pushed by the Federal Reserve. He says he thinks stocks will be more attractive than bonds until the Fed withdraws its accommodation. 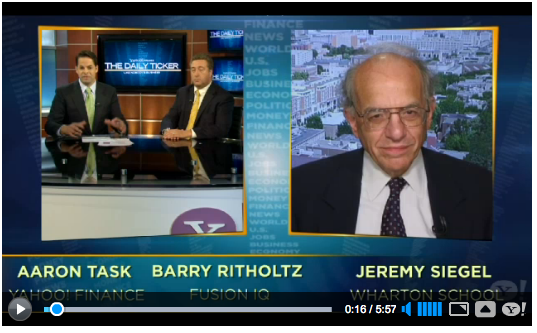 Gaining A Long-Term Edge With The Wisdom of...

In A World of Bad Options, Stocks are...

Is the Growth-Over-Value Edge Finally Nearing an End?

Dalio Warns that ‘Capital War’ Between U.S. and...